LAWRENCE — The Hall Center for the Humanities at the University of Kansas and the Brown Foundation for Educational Equity, Excellence and Research have released a new book, "Recovering Untold Stories: An Enduring Legacy of the Brown v. Board of Education Decision." 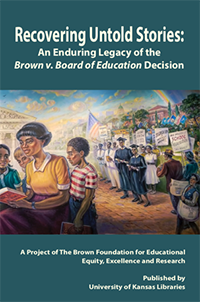 The landmark Supreme Court decision finding segregation of public schools unconstitutional placed Topeka at the epicenter of civil rights history. Yet the full legal citation is Oliver L. Brown, et. al. vs. the Board of Education of Topeka.

The new book's focus is on the "et. al.": It captures the first-person narratives of individuals who were plaintiffs or descendants of plaintiffs represented in the five cases — Delaware, Kansas, South Carolina, Virginia and Washington, D.C. — that were consolidated by the U.S. Supreme Court in the decision.

In the instance of Brown v. the Board of Education, "et. al." relegated several hundred men, women and children to what can be characterized as “legal wasteland,” rendering them largely unknown. The book uncovers and publishes some of their stories to provide a glimpse into the role of ordinary people who found themselves in the center of an extraordinary historic milestone.

Individuals involved in the cases participated in a series of in-person workshops in 2017 convened by the Brown Foundation onsite at the National Museum of African American History and Culture in Washington, D.C. The workshops were facilitated by Cheryl Brown Henderson, founding president of the Brown Foundation, and four University of Kansas scholars: Deborah Dandridge, curator of African American Experience collections, Kenneth Spencer Research Library; John Edgar Tidwell, professor of English; Darren Canady, playwright and associate professor of English, and Vincent Omni, graduate teaching assistant in the Department of English. Workshop participants were guided through the process of writing a first-person narrative.

The results of their work are contained in this collection of essays, within which each person shares personal experiences, or those of their parents, offering a better understanding of the risk, challenge and courage of blacks who refused to be denied constitutional rights in the era of “Jim Crow” laws.

In his 1994 book, "Crusaders in the Courts: How a Dedicated Band of Lawyers Fought for the Civil Rights Revolution," Jack Greenberg, member of the NAACP Legal Defense Fund’s legal team in Brown, poignantly refers to the numerous individuals who are embedded within the legal shorthand “et. al.”: "Before lawyers can win cases, there have to be clients willing to stand up for their rights. The American blacks who proved willing to fight segregation and discrimination were organized for the most part by the National Association for the Advancement of Colored People (NAACP), in an environment hostile to change in the kind of justice afforded blacks."

E-book layout and design were completed by Pam LeRow, digital media services, KU Libraries. KU Libraries also published the book. The project was funded in part by the Hall Center for the Humanities and the Walton Family Foundation.

The book is available online or can be obtained on demand as a print copy.