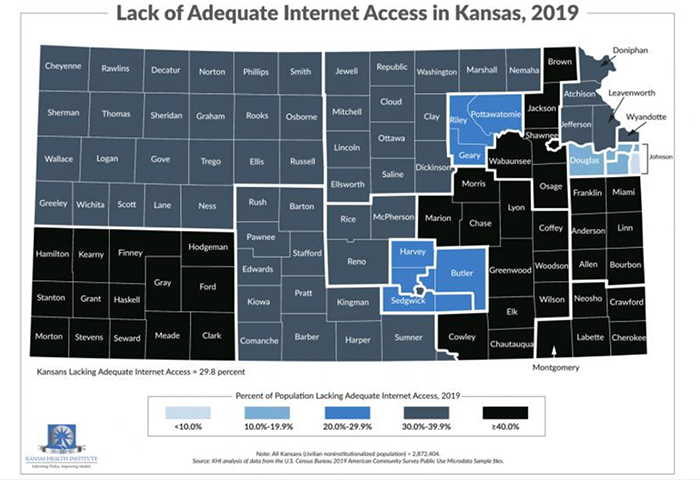 LAWRENCE — A University of Kansas professor is co-author of a new article that argues broadband access is a human rights issue and social justice matter as marginalized communities are left behind in the digital divide.

The United Nations General Assembly declared access to the internet a basic human right in 2016. As such, the field of social work needs to become more involved in pushing for expanded broadband access for all, and policymakers should take on efforts to ensure access is capable for all communities. Edward Scanlon, associate professor of social welfare at KU, made those arguments and shared resources and advocacy tips on the front lines of the issue in an article published in the Journal of Human Rights and Social Work. The study is co-written by Cynthia Sanders of the University of Utah.

“The digital divide is more than just access to high-speed broadband,” Scanlon said. “That part is very important, obviously, but there is also the issue of people simply having a device to access the internet. A third piece has to do with digital literacy and understanding what it means to get online. It’s no longer considered a luxury. It’s now basically considered a utility.”

The digital divide is not just a policy or infrastructure issue. It is a social justice matter in that lack of access disproportionately affects people of color, low-income individuals and families, and those who live in rural areas, the authors wrote, and at the intersection of all of those are Native communities. Scanlon noted that tribal entities in the U.S. are often disadvantaged in this way and shared the example of the Potawatomi Nation, which resides in a Kansas county where more than 40% of the population lacks access to high-speed internet.

“The pandemic has made this issue even more pressing for telehealth and education reasons. Many students struggled to have the ability to do their schoolwork and gain access to access education during the pandemic,” Scanlon said.

The matter is also a social justice issue in that people are less able to get vital information, news or connect with others without broadband. It can also limit peoples’ ability to get adequate education, connect with health care providers, work, apply for jobs, pay bills or receive benefits such as social welfare and other services considered basic human rights in the 21st century, the authors wrote.

There are efforts underway to address the digital divide. Perhaps the best example is California’s Internet for All Now Act, which passed in 2017. The act formed a public-private partnership in which the state authorized hundreds of millions to be allocated to help private companies expand internet access to nearly every part of the state.

“We highlighted that because it’s a few years older than a lot of efforts, and it allocated $330 million,” Scanlon said. “The sheer amount and goal of getting 98% of every geographic area of the state covered is significant.”

Scanlon also pointed to Kansas’ formation of the Office of Broadband Development, recently formed to expand access throughout the state. The office’s work has helped take Kansas from the 40th to 28th most connected state, he added. But, while the numbers look good in many areas, there are still some areas where as many as 40% of residents don’t have adequate access.

Such public-private partnerships as in California’s case are politically expedient as they appeal to conservatives’ wishes to avoid the government taking over expansion efforts and progressive desires to avoid the enrichment of private companies at public expense, the authors wrote.

The authors also argued the field of social work has a role to play in closing the digital divide as well. Just as the field has advocated for and served low-income, marginalized and underrepresented communities in terms of child care, health care access, mental health and other areas, they should focus on the digital divide as a serious social justice issue. It's especially timely as social work services move online like so many other services.

“If you’re going to deliver social services via telehealth, you have to be sure people have access to broadband,” Scanlon said. “Social workers need to advocate like they do for mental health, issues of race, fighting poverty and those traditional causes.”

Scanlon and Sanders shared resources, links to online toolkits, recommendations for talking to policymakers and tips for advocacy groups in the paper.

“Social workers can help amplify the voices of those working on these issues. Almost every community has a broadband access advocacy group. Sometimes they’re centered around universities, or libraries, or even business groups. But we argue social workers need to step out of their typical comfort zones and work on these issues with them,” Scanlon said. “One thing social workers are really good at is listening to people tell their stories and helping share them with those in power. We want to help them share the struggles of those with limited access with policymakers.”

The problem would be best addressed with a consistent national strategy, similar to those taken during the New Deal era to electrify even the most remote parts of the country, the authors wrote, but until then, state and local efforts can learn from success stories.

“This really is a problem that’s national in nature and needs to be seen as part of infrastructure, just like utilities and bridges and roads,” Scanlon said. “While we don’t have that yet, we think we can see best practices from states and local efforts replicated widely.”

Image: The above map from the Kansas Health Institute shows variations in internet access throughout Kansas. Many rural counties have high percentages of residents without sufficient access to broadband internet. Edward Scanlon is co-author of an article arguing the digital divide is a social justice issue that should be addressed thoroughly by the social welfare field as well as policymakers. Credit: Kansas Health Institute