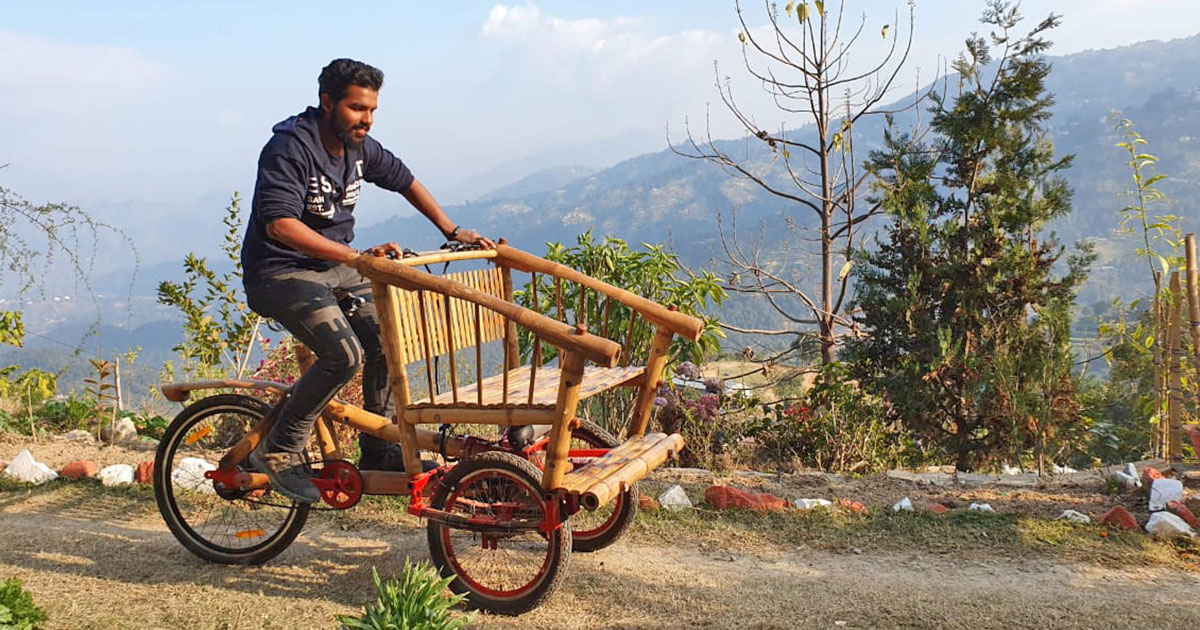 LAWRENCE – Where there’s a will, there’s a way. The truth of that saying was revealed once again to Lance Rake when he traveled to Kathmandu, Nepal, last year to develop a delivery version of the bamboo bicycles for which he is known.

Without what he called proper tools or even flat surfaces on which to work, the University of Kansas professor of industrial design and his partners at Nepal’s Abari Foundation developed a working prototype of an electric-assisted, bamboo-bodied tricycle whose use holds the promise of reducing pollution in the historic city center.

Last spring, Rake won a Fulbright Global Scholar Award for his proposal to spend six months in Australia and Nepal, working on the prototype that blends the latest technology with natural materials.

He spent the first three months visiting the Royal Melbourne Institute of Technology in Australia, working with experts in electric motors. His research helped him choose the small electric motor contained in the hub of the rear wheel of the cargo bike, which has been nicknamed the "habre" after the Nepalese word for red panda, a bamboo-munching mammal native to the region.

“Nepal is a poor country, and Kathmandu has terrible air quality,” Rake said. “It’s like being in Delhi,” despite being a fraction of the size of India’s capital. The Himalayan mountains ringing the city exacerbate the pollution problem, but they also beckon the tourists that fuel the city’s economy.

So Rake set out to transfer his bamboo-bike methods to the Nepalese context. The goal of using bamboo, rather than other materials, is to provide work for local craftsmen, to employ a sustainable resource and to reduce the pollution created by other manufacturing processes.

“The cause of the air pollution in Kathmandu is all the cars and motorcycles,” Rake said. “You could do a lot of that more efficiently with an e-bike. In Nepal, they have to import all their fossil fuel, but they have adequate supplies of hydroelectricity.”

The goal of the Fulbright project was to create “something that could become iconic to Kathmandu,” Rake said.

So he reached out to Abari Foundation’s founder, Nripal Adhikari, a designer with experience building structures from bamboo and rammed earth. Rake also served as a visiting professor at Kathmandu University during his stay and involved some graduate students on the project. After some initial iterations using steel members, the team gradually reduced the amount required and replaced it with bamboo wherever possible. Even the leaf springs are made from layers of bamboo.

Rake praised the ingenuity of the Nepalese craftsmen with whom the team worked.

“It was pretty rare somebody was working on a table,” Rake said. “Usually, it was on the ground. One time we had to bore a hole in bamboo about an inch and a half around. We asked, ‘Have you guys got a hole saw?’ The answer was no. So a guy found a piece of steel and cut it out and ground it down until it was the right size to form a sort of drill bit. Here, work stops until we have the tool we need. There, they just make it work.”

Most modern cargo bikes are electric-assisted, Rake said, and so is the habre eco-bike. That will allow it to be more easily used as a people-moving rickshaw as well as a delivery vehicle on all kinds of roads, he said.

Initial public reactions to the final prototype were positive, Rake said. He and Adhikari took it out on the streets of Kathmandu in January, letting traffic police officers ride it and kids climb on it to stress-test it.

“Now they’re making six more of them for a little broader test,” Rake said. “There are a couple of areas around world heritage sites that they want to protect from polluting, gas-powered vehicles. Hopefully, they will do it more and more.”