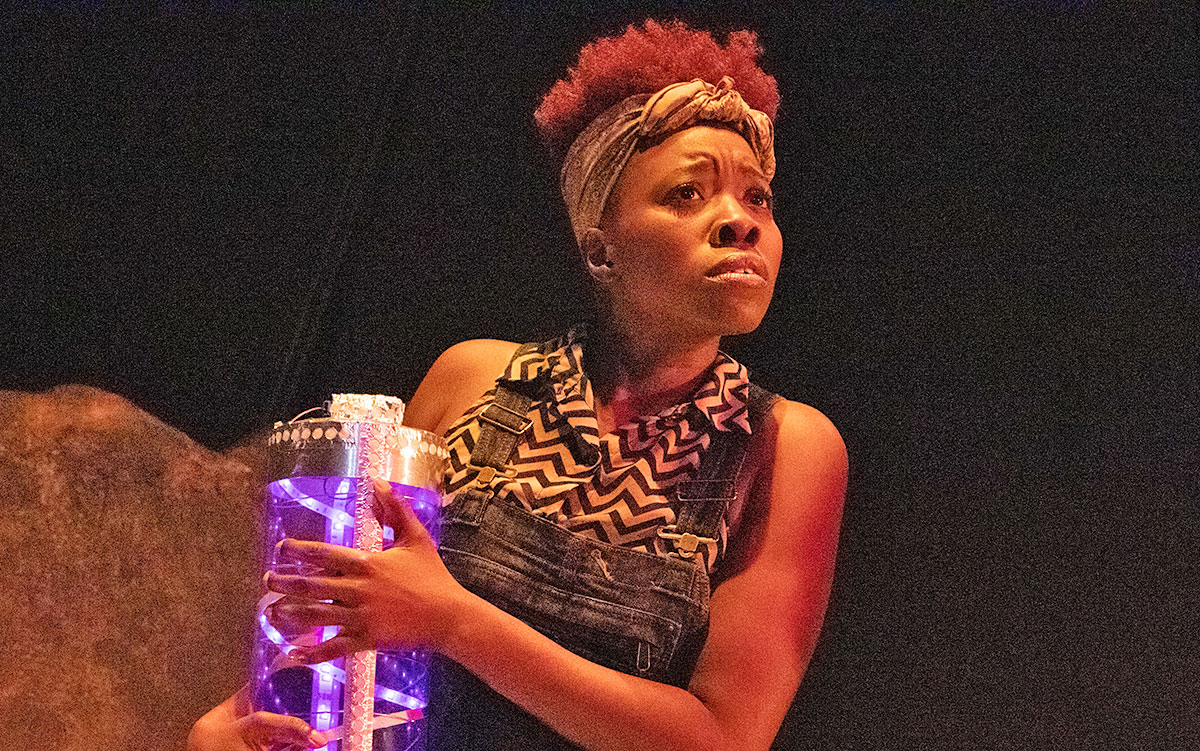 LAWRENCE – Playwright Darren Canady shocks audiences by opening his new two-act drama, “Reparations,” with a scene of a lynching.

But he leavens that tragedy with later scenes of the love and dedication that sustained African Americans through centuries of trial, even offering an Afro-Futuristic vision of hope. Seattle’s Sound Theatre Company opened “Reparations” Jan. 8 at the city’s Langston Hughes Performing Arts Institute. It runs through Feb. 2.

An associate professor in the Department of English at the University of Kansas, Canady leans into challenging subject matter like “Black Butterflies,” his 2017 critique of the school-to-prison pipeline ensnaring African American girls.

Canady said he began writing “Reparations” a decade ago but shelved it. He pulled it back out and revised it for the 2017 playwriting competition sponsored by Seattle’s Asian American theatre company, Pork Filled Productions. He worked in a close artistic partnership with Jay O'Leary, Sound Theatre Co. assistant artistic director, on the initial festival production and then again for this professional premiere.

“It happens across three time periods, and you kind of leapfrog in and out of those time periods,” Canady said. “The characters that were ancestors and who appear in 1922 and 1961, I expanded their roles and changed a variety of things around.”

The third time period is “the near future,” Canady said, and the sci-fi device for accomplishing this time travel he calls “The Visualizer.”

“The technology that the play uses as a literary device ostensibly doesn't exist,” Canady said. “I would say it sort of exists, really. The supposition of the play is that we have developed a technology that can allow humans to access blood memory. You can experience the memories of your ancestors because we carry them around in our DNA. This technology ties the ability to experience that memory to your blood and to place. So does that exist? No. But the reason why I say near future is because we do have research that suggests that trauma is inherited and that major trauma actually can affect the DNA structure.

“And so if trauma shifts the DNA structure, that will affect ensuing generations, and they'll have a genetic-level memory of that trauma that an ancestor experienced.”

In “Reparations,” a future Oklahoma offers compensation to black residents who can prove a family connection to “state-sponsored violence” — enslavement and/or, in the case of the protagonist, a young woman named Rory, lynching.

“She thinks, ‘Great. I'm gonna get someone to acknowledge the horrible things that happened to my family.’ That’s is all well and good,” he said, “until you start to really unpack what that might mean, and that's where things get complicated for her. ... Each discovery that she makes shifts her desire.”

Rory grows angry at not having been told certain aspects of her family’s story. But Canady said she learns why.

“There are reasons, perhaps, that we're not told certain things,” Canady said. “It has to do with the fact that, sometimes, that's all our grandparents and parents and those who came before us could do was to survive from one day to the next. Living in that place of trauma, of that horrible memory, can be harmful, and they don't want to pass that on to the next generation.

Canady does not minimize the current discussion of monetary reparations for African Americans, but he’s dubious of any government acknowledgment of having harmed people. Further, he believes reparations must be more than monetary.

“There is a slippery slope if it's only about doing the 2020 version of 40 acres and a mule — 'X' millions of dollars per person that can trace their lineage back to a specific slave plantation,” Canady said. “I mean, sure. Fine. But that's actually limiting. I want us to think about what resources are we providing for people who have actually inherited the ghosts of this trauma and this racism, and those sorts of resources are a little bit more abstract.”