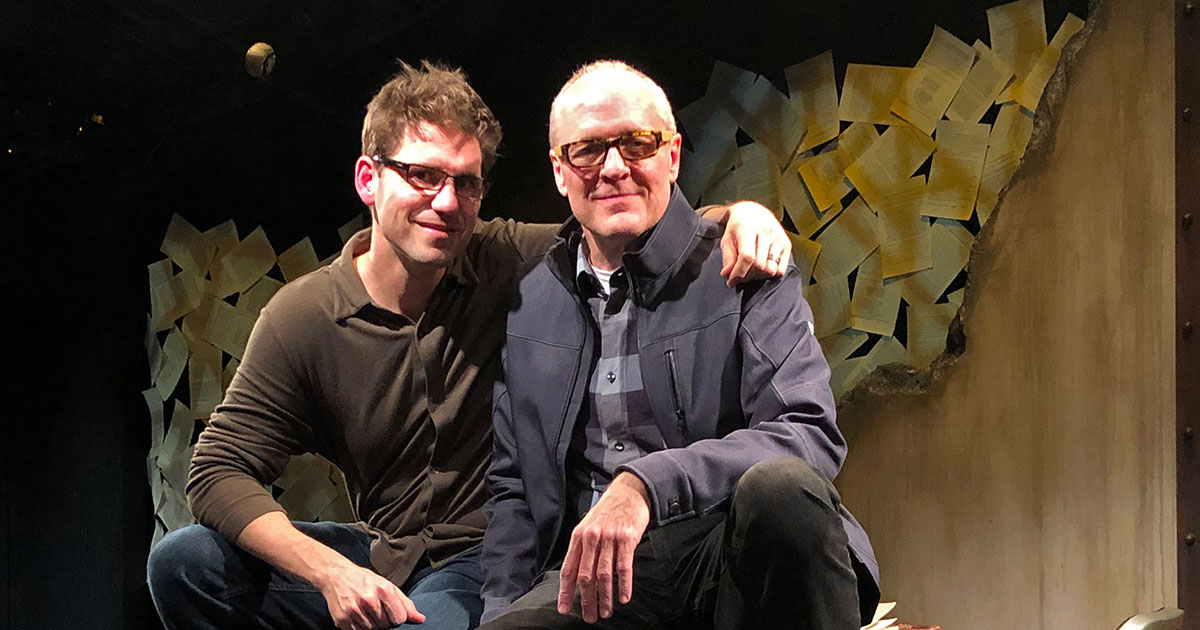 LAWRENCE — What cause are you willing to put your life on the line for?

Would you be in the streets today in Hong Kong?

And what are you doing about the 1 million Uighur Muslims being forced into detention camps in China?

All these probing questions and more are raised by the new play premiering Tuesday, Jan. 21, at Kansas City’s Coterie Theatre, “The White Rose: We Defied Hitler.” The play is co-directed by Markus Potter, University of Kansas assistant professor of theatre. 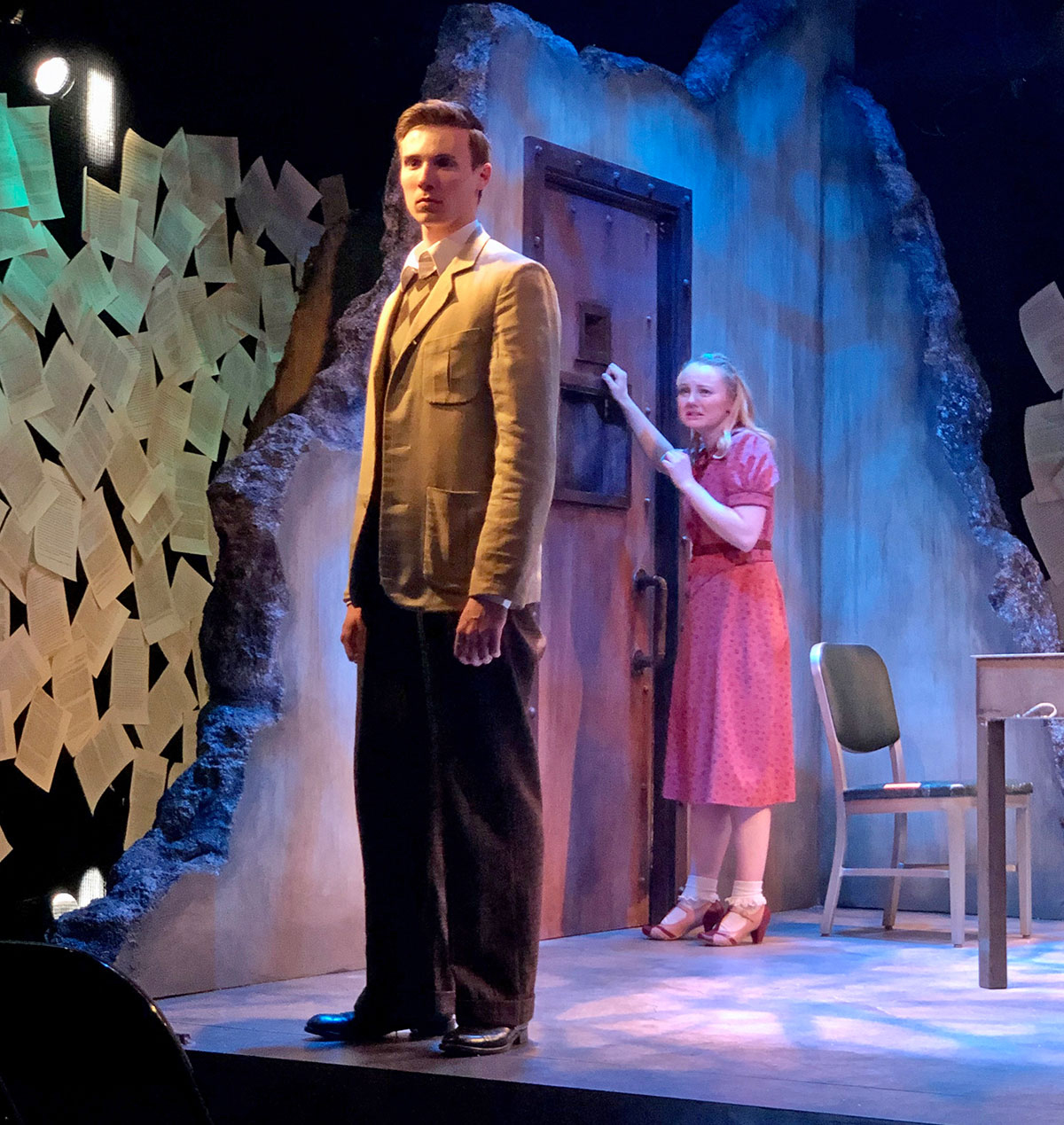 Even if the Holocaust is far removed from today’s young audiences, for whom the play was adapted, Potter says teens who see “White Rose” should easily relate to the idealism of the play’s real-life protagonist, Sophie Scholl, 21-year-old leader of a cell of anti-Nazi German students, and see the implications for their own lives.

“The play is really affecting me recently,” Potter said. “Just the idea of taking small actions, and that one action can have an exponential effect. And we just don't know which one of our actions will have that effect and which ones won't, but rejecting apathy and engaging in doing something. Sophie has this beautiful line when she's being interrogated. He's asking her ‘Why did you do this?’ And she says, ‘Because if not me, who else? ... I could do something. I decided to act.’

“Young people being engaged and fighting for — it's just so inspiring, from Parkland to the Hong Kong protesters,” Potter said. “It’s got (climate activist) Greta (Thunberg) written all over it.”

Potter said he and playwright David Meyers worked together previously in New York theatre. An adult version of the play is being planned for off-Broadway. Meanwhile, after getting to know the community through his work at KU, Potter found that Kansas City’s esteemed Coterie Theatre had the young-adult version, “White Rose,” on its schedule for this season.

“Jeff Church, the Coterie’s artistic director, and I start talking, and I'm like, ‘Oh, Jeff, I know exactly what this play is. I've read every draft of this,’” Potter said. “And then, before you know it, we were talking about co-directing.”

Potter specializes in new plays with social relevance, having directed “Chasing Gods” last year at the Kansas Repertory Theatre. He is the producing artistic director of NewYorkRep, an off-Broadway company that develops new work.

And he has a personal connection to the White Rose story, too.

“It's dark, heavy material,” he said. “But it’s so important for these kids to see what their peers are capable of. It is so important right now in the age of misinformation. There's this line in the play where they were talking about how the Jews were being killed, and the Nazi officer says, ‘No one is killing them.’ And Sophie's reaction was, ‘Of course, people are being killed! Look at these news stories.’ But this misinformation of ‘no one's killing the Jews’ — my uncle, who was raised in Germany at the time, said that was the line he heard as a kid growing up: This isn't really happening; the thing you're hearing is not reality. But this is the ultimate gaslighting.”

Much of the questioning Sophie undergoes in the course of the play is about how the White Rose members distributed their dissident manifestos, using 20th-century techniques like printed leaflets, under the noses of the fascist regime that banned them on penalty of death.

Potter says that material is there to make a larger point.

“It is unbelievable,” Potter said, “the labor and how they had to disguise it and hide stacks of paper. How buying more than a certain number of stamps at the local post office would get you turned in, because people were on the watch for whoever was putting out this anti-Nazi propaganda. So the risk and the courage that it took.

“I mean, I think about these Hong Kong protesters now. How they can be out there when just being seen on the street during a protest means 10 years in prison, and you and your family tracked and watched for life? You think about a journalist in Moscow right now speaking out against Putin and that authoritarian government and what it takes for a human being to sacrifice and take that risk. It's inspiring.”

So sure, “White Rose” is meant to inspire young people to stand up for what’s right. But if you know your history, it’s no spoiler to note that Sophie and Hans Scholl were executed by the Nazis.

And so, Potter said, the play is also asking audiences, “What are you willing to make the ultimate sacrifice for? What values are worth fighting for? What values are worth dying for? Hans Scholl, before he was guillotined, his last words were, ‘Long live freedom!’ We don’t really have any idea of what it means to not have that freedom — religious freedom, freedom of speech and so on. Those core values are something we can easily take for granted. So we’re asking our audiences to think about what their core values are and what they would be willing to fight for.”

The middle- and high school students who make up the Coterie’s weekday audiences will be invited to leave a note on the wall of the foyer, saying what they’re going to fight for in 2020. And they’ll be invited to participate in the annual White Rose Essay Contest sponsored by the Midwest Center for Holocaust Education, which is an educational partner in the show.