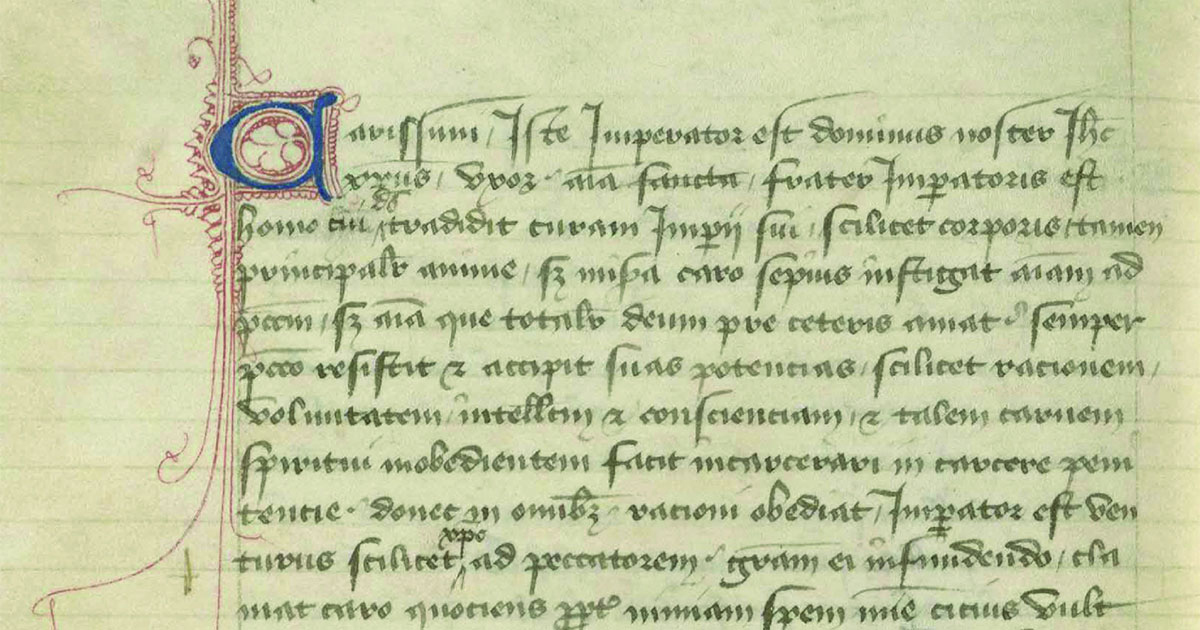 LAWRENCE – Stop the presses! Start tweeting! There is breaking news from the 15th century!

A University of Kansas scholar has just identified one of the most important British authors between Chaucer and Shakespeare, Thomas Hoccleve, as the man who wrote a book held in the British national library collection for centuries.

Described in a new article in the Review of English Studies, using handwriting analysis, Associate Professor of English Misty Schieberle identifies Hoccleve as the scribe responsible for a volume known as “British Library MS Harley 219.” It is a collection of selected literary works in English, French and Latin, with Hoccleve’s annotations and a glossary he devised that translates French terms into English or Latin.

Aside from copies of his own poetry, this is only the second literary manuscript scholars have identified that Hoccleve produced and a field-changing discovery.

“This is really exciting. Any time that you can identify a manuscript that has been written in the hand of a major medieval figure, it's an important event,” Schieberle said. “Imagine if you found a book in which Chaucer or Shakespeare had copied and annotated texts that they would later use in their original poetry. That's what this is for Hoccleve, for the intervening time period. He is one of the major figures in 15th century poetry, one of Chaucer's successors.”

Hoccleve, who may have known Chaucer, in fact was instrumental in establishing Chaucer’s reputation as the father of English poetry. Hoccleve worked in the Royal Office of the Privy Seal, where he composed letters for King Henry IV stamped with the royal seal. He dedicated an original, educational poem, “The Regiment of Princes,” to the future Henry V, and he wrote numerous other poems on important cultural topics.

The pages of “MS Harley 219” are about 9 by 7 inches, or roughly the size of a modern hardback novel. Schieberle said that among the medieval works excerpted in “MS Harley 219” are Odo of Cheriton’s “Fables” (modeled on Aesop’s collection), selections from “Gesta Romanorum” (i.e., Deeds of the Romans), an incomplete French “Secretum Secretorum” (Secret of Secrets) and Christine de Pizan’s “L’Epistre de Othea a Hector” (Letter of Othea to Hector). What these materials have in common is the focus on telling stories that teach moral behavior.

What makes this a groundbreaking discovery, Schieberle said, is the fact that the “Gesta” and “Secretum” were particularly influential on Hoccleve’s original English poetry. Because medieval manuscripts were all hand-copied and could vary substantially, this marks the first time scholars have had access to the precise source texts that Hoccleve could have consulted as he was composing his original retellings of two “Gesta” tales and his “Regiment” for the future Henry V.

Additionally, “This is the only complete text of the Letter of Othea with a dedication to Henry IV of England,” Schieberle said. Identifying Hoccleve as the copyist is crucial, she said, because his proximity to the King “indicates more authority for it, because he was likely using the king’s personal copy sent directly to England by Christine.”

Schieberle said the origins of “MS Harley 219” had been unclear until the 17th century, when it was owned by various collectors and later sold to the British nation in 1753 to found the national library.

The association with Hoccleve had never been identified for a couple of reasons, she said.

“Most people who've looked at this manuscript have done so in the process of producing an edition of one of the texts,” Schieberle said, “so they were not interested in all of the texts, or necessarily in analyzing the handwriting.

“This just happened to be the perfect storm of noticing some idiosyncratic handwriting traits and showing some images of them to a friend who said, ‘You might look into the scribes in the Privy Seal Office, and Hoccleve, in particular.’”

Schieberle, who is trained in manuscript studies and analysis of medieval handwriting, said that once she began working on the idea that “MS Harley 219” was penned by Hoccleve – about a year ago — she quickly became convinced that such was the case.

“It was so evidently his handwriting,” she said. “After I'd looked at other samples and other scholars’ work and consulted friends who had worked closely with his handwriting, I spent a lot of my time looking at other texts written by Hoccleve, to understand this volume within the context of his career.”

It is unclear, Schieberle said, for whom the book was originally produced.

“That's one of the big questions,” she said, “because there is no dedication. And there are no names that we've been able to identify in the manuscript. But it's clear that a user would had to have known Latin, French and English to grapple with the texts — so a highly educated person at that time.

“It had been suggested previously that perhaps the volume had been collected for a princely or noble reader. But that person might not have had the Latin to approach everything in the volume.

“What I'm suggesting as most likely is that it was a volume that Hoccleve and his friends or fellow clerks in the London area could have used and enjoyed. These are men who were trained in French and Latin in order to carry out government business.”

Schieberle notes that she came to this discovery while working on “MS Harley 219” as research for her forthcoming edition of medieval English translations of de Pizan’s “Epistre Othea.”

KU in the news
The Washington Post — Mon, 02/03/2020
Vladimir Putin follows a long Russian tradition of enlightened autocrats
National Public Radio — Sun, 02/02/2020
Making Super Bowl guacamole? Be careful to avoid the pits of an avocado hand injury
Preserving historic landscapes and the buildings within them is not about conservation at all costs, says an… https://t.co/UB3aqnEhz8
«»
Follow us on Twitter »