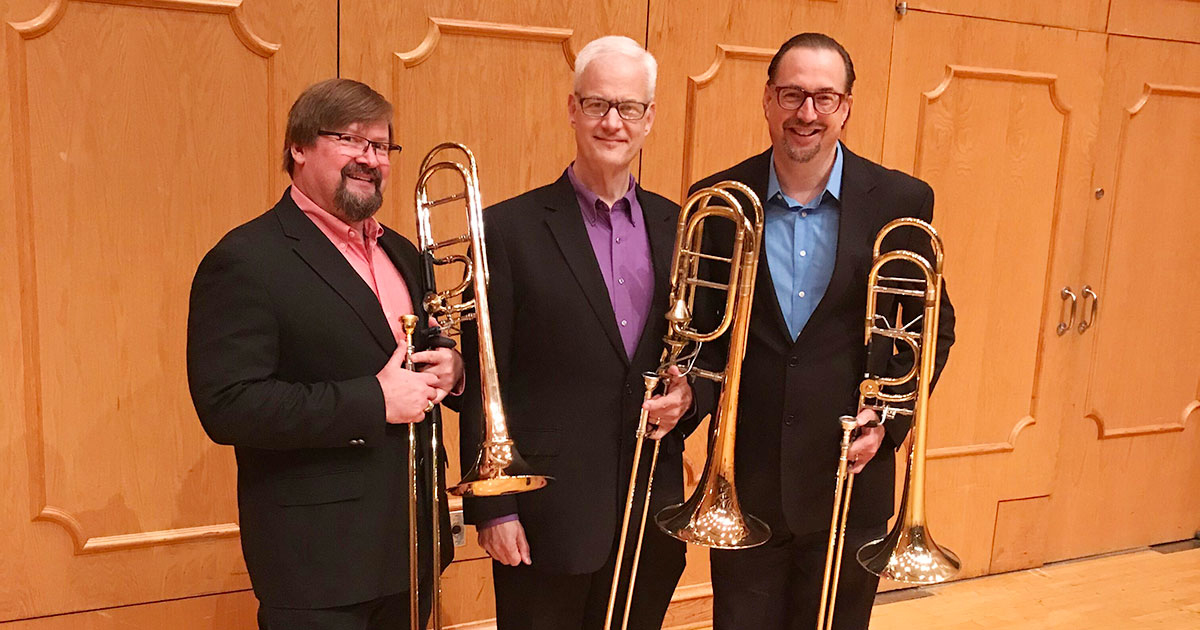 LAWRENCE – When Michael Davidson went through the childhood ritual of choosing a band instrument, the trombone appealed immediately.

He recalled the scene: “I’m in sixth grade. It’s band instrument-choosing day. I looked at all the woodwind instruments lined up on the table and thought to myself, ‘Man, they’ve got more buttons to punch down than I’ve got fingers. I don’t know how anybody plays one of them.’

“And then I looked over at the brass instruments and thought, ‘There’s only three valves — three buttons to push down. OK, I can do this. Band day’s getting better by the minute.’

"And then I saw the trombone, and it had a slide — no buttons to push at all. And I said to myself, ‘I can definitely play this instrument.’ Honestly, that was my thought process. As an unexpected bonus for a sixth-grader, the driver didn’t fuss at me when I carried my trombone on the bus. My friends that played French horn or tuba were not so lucky.”

Today, Davidson still carries that case around as associate professor of trombone at the University of Kansas School of Music and one of two tenor trombonists in Drei Bones, the trio that has just released its second CD, “Of Hammered Gold” (Emeritus Recordings, 2019).

Davidson says part of the mission of the group and its recording career is to demonstrate the variety of sounds that the deceptively simple brass instrument is capable of making, especially when tripled.

Davidson has been exploring trombone chamber music for a while now. When he lived in Louisiana, he and friends from there and Texas formed the LATEX Trombone Quartet (get it?) and recorded a self-titled CD. When he moved to Kansas in 2007, he and LATEX holdover J. Mark Thompson of Northwestern State University of Louisiana regrouped with colleague Timothy Howe of the University of Missouri-Columbia to form Drei Bones. Thompson plays the bass trombone, while Davidson and Howe share lead lines.

Their self-titled debut CD was released in 2016 on Sy Brandon’s Emeritus label.

“We wanted to record some gems of the trombone-trio world on the first CD, as well as some new things,” Davidson said.

After traveling and performing music from the first CD for a couple of years, Davidson said, the group commissioned five composers to create works for them this time out: James Mobberley, Thomas Davis, Paul Seitz, John Cheetham, PJ Kelley and Brandon.

Mobberley, the Curators’ Professor of Music at the University of Missouri-Kansas City Conservatory of Music and Dance, was nearby in terms of geography but far out in terms of the contours of his music. He is an angular modernist, renowned for his incorporation of electronic sounds into semi-classical concert music.

“You hear us playing along with some prerecorded sounds he's done,” Davidson said. “It’s really quite an interesting piece.”

Cheetham, on the other hand, has written a scherzo for brass quintet that Davidson says has become a modern standard of the form. The piece he contributed to the new recording, “Trialogue,” is a technically difficult one that requires “a lot of double-tonguing,” Davidson said.

Marc Lys’ “Trois à Troyes,” a tribute to the French city, finds “a cool little balance” among pop, rock, jazz and classical styles, Davidson said. “The first movement features Tim on an improvised solo over a walking bass line; the third movement begins with a single melodic line that we have a snippet of – the melody is passed between all three trombone parts, so coordination and timing is the challenge for us here; the fourth movement, ‘Badinage,’ is just a lyrical ballad.”

Tom Davis is one of two composers featured on both of Drei Bones’ CDs, the other being early 20th-century Russian trombone pedagogue Vladislav Blazhevich.

“Tom Davis was one of the composers on our first CD,” Davidson said. “He and Tim have a good relationship, so we went from there, essentially.”

“The two other movements were inspired by the toys, songs and good times he had with her,” Davidson said. “You can hear Josie burbling away, laughing.”

The recording was the result of some cross-border cooperation in that a grant from the University of Missouri supported the commissions to the composers, while KU chipped in with a faculty research development grant to make the recording at Swarthout Recital Hall.

The tonmeister (a designated set of outside ears who chooses the best take for the recording) for the CD was Davidson’s colleague Scott Watson, longtime KU professor of tuba and euphonium. KU’s Brock Babcock was recording engineer.

In addition, Kelley is a graduate student at KU, studying under Davidson, while Seitz is an adjunct professor of music theory at MU.

The deal with nonprofit Emeritus to cover other associated costs (mechanical royalties, promotion, digital distribution) and to release the CD came after winning a competitive grant process. The group chose Emeritus founder Brandon’s “Dry Bones Fantasy,” which Davidson called a variation on James Weldon Johnson’s spiritual “Dem Bones,” to close out the record.