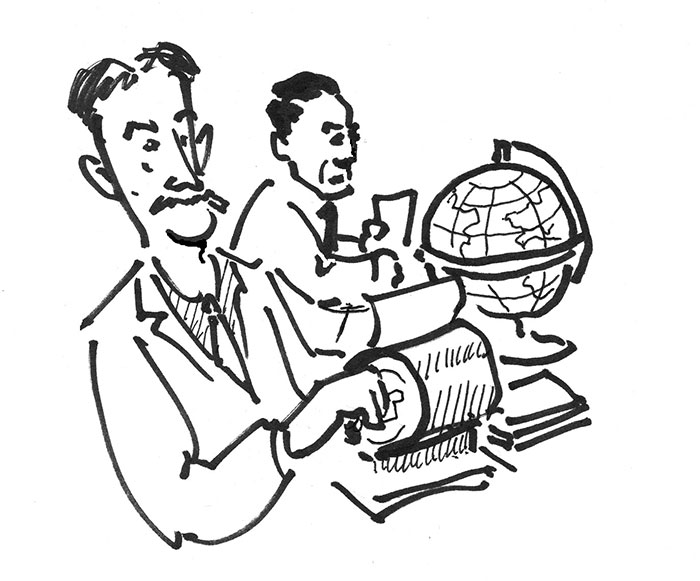 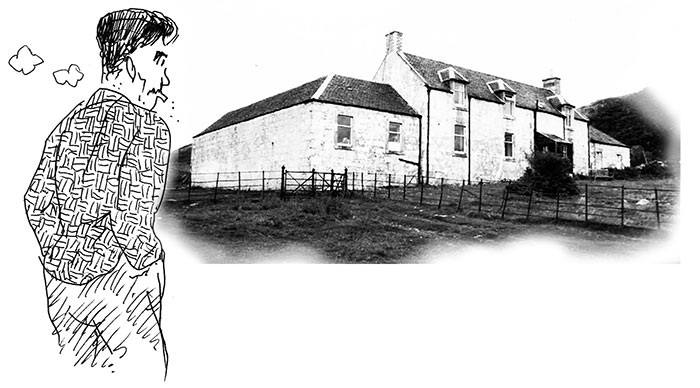 LAWRENCE — A recent discovery by a University of Kansas sociologist reveals that author George Orwell not only vocally advocated human rights but attempted, in the years between writing "Animal Farm" in 1945 and "1984" in 1949, to found an international body that would defend human rights in the tense aftermath of World War II. His partners in this project were also renowned: the philosopher Bertrand Russell and the novelist Arthur Koestler. 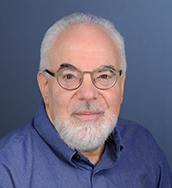 In his new book, "George Orwell Illustrated," Professor David N. Smith offers an encompassing look at Orwell's life, writings and worldview, with illustrations by artist Mike Mosher. Smith also presents and discusses a previously unpublished document that he found in an obscure archive: a manifesto that Orwell wrote in 1946 in dialogue with Koestler and Russell.

Smith said that two things stood out regarding the manifesto. To begin with, Orwell seldom wrote with co-authors. Second, the manifesto was written for a directly constructive purpose.

"In his essays, Orwell was mainly a cultural commentator," Smith said, "but in this document, with Russell and Koestler, he called for a new international organization, which they themselves planned to organize."

Orwell is best known, of course, for the dystopia "1984," which Smith first discussed in "Orwell for Beginners" – an early version of "George Orwell Illustrated" that, not coincidentally, was published in 1984.

Interest in Orwell has grown steadily since he succumbed to tuberculosis at the age of 46 in 1950.

"So much attention has been lavished on him," Smith said, "that Orwell is clearly among the 20th century's most influential writers."

Renewed interest in "1984" soars, Smith said, whenever government deceit and overreach are brought to light, as they were in Edward Snowden's revelations about National Security Agency surveillance in 2013 and, early in Donald Trump's presidency, when talk of "alternative facts" and Russian intervention in the 2016 election became commonplace.

Smith discovered Orwell's manifesto after finding, in the final volume of Orwell's complete works published in 1998, that Orwell had exchanged friendly letters with Ruth Fischer just months before "1984" appeared. In the 1920s, Fischer had been the general secretary of the German Communist Party, but since then she had been an intransigent opponent of the Soviet Union and German communism.

In 1948, Fischer published a critical exposé of Joseph Stalin's betrayal of the German left, which Orwell read and admired. That led to their correspondence, which piqued Smith's curiosity and led him to rummage through Fischer's archive at Harvard. There he found the human rights manifesto, which Fischer had received from Koestler in 1949.

Orwell wrote the manifesto after spending Christmas in Wales in 1945 with Koestler and his family. It was during that holiday that Orwell and Koestler decided to form a new group that would lobby for the ever-deeper democratization of society.

World War II had just ended, and though the Cold War had not yet begun, tensions between the United States and Soviet Union had begun to rise. Orwell and Koestler feared that even harsher dictatorships and deadlier wars would be the grave outcome of these tensions – not least, Smith said, because atomic weapons had just been used for the first time in Hiroshima and Nagasaki.

"Orwell and Koestler felt that it was in everyone's interest to promote peace and democracy, and they believed they had a small window of opportunity to influence public opinion before the two sides split apart and perhaps started fighting," Smith said. "That was the hope that led them to call for a new international organization that would press not only for human rights in the conventional sense but also ‘equality of chance for every newborn citizen’ and unfettered access to ideas and opinions, across every border."

Ultimately, the project faltered, as Koestler and Russell became more intensely anti-Soviet, while Orwell wanted to maintain a posture of neutrality.

"Orwell was critical of every major power, but he wanted their new organization to be evenhanded and neutral, defending human rights everywhere," Smith said.

When that hope was dashed, Orwell moved to an island near Scotland, where he turned his concern about dictatorship and atomic war into "1984." Although many of his dystopian fears ultimately proved to be more than justified, Orwell's aim in "1984" was to sound an alarm – with the hope, Smith said, that dystopia could be forestalled.

Now, Smith said, he sees parallels to Orwell’s human rights views in some of the late-breaking developments in today's United Nations. Most notable, he said, is Philip Alston's reporting as the U.N.'s special rapporteur on extreme poverty and human rights, which, in several ways, resembles Orwell's manifesto.

"Orwell isn't usually pictured as someone who wanted to have a direct constructive impact on world affairs," Smith said. "But he did have that wish, and the manifesto makes it clear that he saw his literary work, his novels and essays, as part of that larger mission."

Writing about Orwell with illustrations on every page is an attempt to blend scholarship with whimsy.

"The goal,” Smith said, “is to produce a work that’s as inviting as it is serious."

Top image: Illustration by Mike Mosher of George Orwell and novelist Arthur Koestler working on a manifesto in the 1940s that advocated for an international body that would defend human rights in the tense aftermath of World War II. The image appears in the new book "George Orwell Illustrated" by David Smith, KU professor of sociology, and Mosher. Smith discovered the previously unpublished document while researching the book.

Second image: Illustration by Mike Mosher shows George Orwell arriving in the Hebrides, where he wrote his well-known book "1984."

Search options »
Subscribe to KU Today
KU in the news
The New York Times — Tue, 01/25/2022
How do you say Kyiv? It can be hard for English speakers.
National Public Radio — Sun, 01/23/2022
A medical ethicist weighs in on how to approach treating unvaccinated people
Leaf through the richly illustrated new catalog of pre-Columbian art from Central and South America co-edited/writt… https://t.co/btP7FBx1Jo
«»
Follow us on Twitter »
Why KU
Apply »
One of 34 U.S. public institutions in the prestigious Association of American Universities
44 nationally ranked graduate programs.
—U.S. News & World Report
Top 50 nationwide for size of library collection.
—ALA
5th nationwide for service to veterans —"Best for Vets: Colleges," Military Times