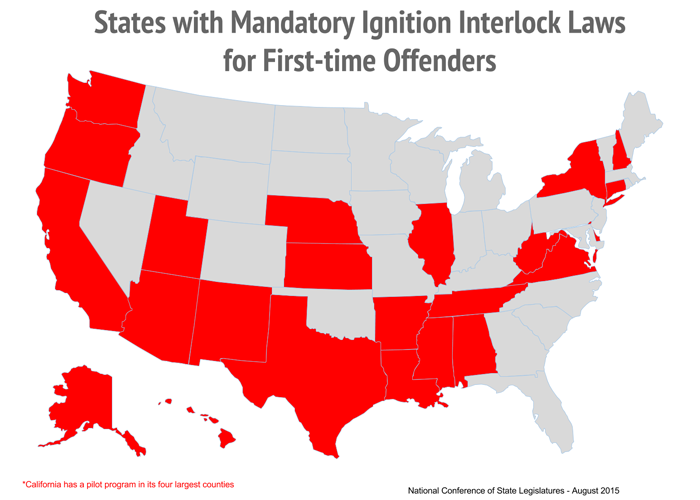 LAWRENCE — The National Highway Traffic Safety Administration estimates intoxicated drivers involved in fatal crashes are six times more likely to have a prior DUI conviction than drivers with no alcohol in their system.

Ignition interlock devices that prevent DUI-convicted drivers from operating their vehicles if their blood contains a certain level of alcohol are associated with a 70 percent reduction in arrest rates for impaired driving, according to the U.S. Centers for Disease Control. These agencies estimate 30 people in the U.S. die every day in crashes involving an alcohol-impaired driver.

Yet, just less than half of states mandate that first-time DUI offenders use ignition interlock devices before being able to operate their vehicles, according to the National Conference of State Legislatures. However, University of Kansas researchers in a new study found that rather being treated as an effective public safety tool that can prevent deaths, ignition interlock laws are typically viewed like normal regulatory policies or seen as too lenient a form of criminal punishment.

"It's a problem that is solvable, and from a health and public safety perspective, if all we had to do was just install an interlock device on the vehicles of DUI offenders or first-time offenders, and it has the potential to not only reduce the recidivism rate of driving while intoxicated but, more importantly, prevent DUI drivers from killing innocent bystanders, then it is well worth it," said Steven Sylvester, KU doctoral candidate in political science.

The Policy Studies Journal recently published online the article "Buzz Kill: State Adoption of DUI Interlock Laws, 2005-11" that includes the findings of Sylvester and co-author Don Haider-Markel, professor and chairman of the Department of Political Science.

The researchers found that most states that adopted the ignition interlock requirement for first-time DUI offenders were reacting to a high DUI fatality rate and that it depended on lobbying efforts and being able to resonate with legislatures that are more amendable to instituting government regulation.

All states have some sort of ignition interlock law, but most only require them for repeat DUI offenders, instead opting for more traditional punishment of first-time offenders such as fines, required alcohol evaluations and classes, temporary license suspensions and even days in jail.

The researchers said states have found benefits in addition to the public safety angle, such as a reduction in probationary costs because a third party is administering the devices and offenders pay a monthly fee for the program. Still, some people argue that requiring an interlock device for first-time offenders instead of more traditional sanctions is not a severe enough punishment.

"This isn't really punitive. It's punitive in the sense that they have to install it on their car and pay a monthly fee, but they're not going to jail," Sylvester said. "Individuals are still allowed to drive and go to work, but you need to put this device on your car before you’re able to drive. So it's not what we normally associate with DUI policies."

There are also cultural factors at play. Alcohol consumption is often thought of as a private, personal issue instead of a public safety or health issue, Sylvester said, though more public movements have highlighted the problem, such as groups like Mothers Against Drunk Driving, law enforcement awareness campaigns, and patrols and check lanes.

The study included data through 2011, when 15 states had a first-offense interlock requirement. Since then it has increased to 23 — largely because neighboring states tend to follow suit — but Haider-Markel said people in most states still perceive the punishment as too lenient.

"We have a criminal justice policy that has diffused pretty rapidly through the states, and it is not a punitive solution to a problem," Haider-Markel said. "Instead it is a very effective technological solution to a problem that doesn't demonize the offender. This is very different from most DUI policy and most criminal justice policy in general."

Sylvester said future research would likely address several more related aspects of these types of policies, including examining whether the policy has reduced fatalities in states that have adopted the approach. However, he said its potential for effectiveness could change how politicians and residents of most states approach DUI policy.

"My hope is that people will understand that there is a real possibility that we can prevent people from dying from DUI crashes," he said. "If we target those first-time offenders, make them realize how dangerous this behavior is, and use it as a deterrent for future actions, then passing the policy is worth it.”