LAWRENCE — The time has finally come to end the separation of special education and general education students, researchers at the University of Kansas argue in a new publication. Not only does research show that all students have higher achievement in fully integrated environments, but support and public policy for schools to make such a switch are coming into place as well. 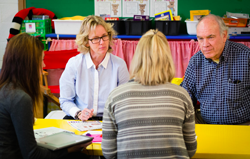 Wayne Sailor, professor of special education and director of the Schoolwide Integrated Framework for Transformation Center and Amy McCart, associate research professor in KU’s Life Span Institute and co-director of the SWIFT Center, authored an article in the journal Research and Practice for Persons with Severe Disabilities arguing the “stars are coming into alignment” for full inclusion in schools. Such a change would reverse a trend in the United States since Congress passed the Education for All Handicapped Amendments in 1975 to separate students based on perceived disability and re-examine the idea of special education.

“Even though the preponderance of research shows that all students, not just students with disabilities, fare much better educationally when integrated with general education, there still is segregation in the schools,” Sailor said. “The EHA was never intended to create an entirely separate system, yet that’s what happened. Special education became a place instead of educational supports.”

The authors argue that viewing special education as a way to examine the disabilities of an individual student and react to them is an outdated idea. Instead, educators should examine how they teach, the educational environment and shift resources to benefit all students. KU’s Schoolwide Integrated Framework for Transformation Center, or SWIFT, is working with 64 schools in 16 districts in five states to implement their model of fully inclusive education. The center provides support that benefits everyone from state education officials to teachers, administrators, students, parents and community members.

By refocusing the existing educational approach to general and special education and expanding inclusiveness for students covered by Title 1, those from low-income backgrounds and English language learners, SWIFT addresses the question of whether inclusiveness can improve educational outcomes.

“The answer is ‘yes, quite dramatically,’” Sailor said. “If you put the SWIFT framework in place, all students show improvement.”

Sailor and McCart argue in the article there are six critical issues facing public schools, especially chronically low-performing schools, which must be addressed to bring about school reform:

Simply pointing out problems or obstacles is not enough to bring about change, so SWIFT braids together five domains for inclusive school reform. All of the domains are backed by research, and further evidence is growing. A multi-tiered support system or MTSS, which provides interventions and support for students at varied levels of intensity, and Universal Design Learning curriculum and instruction are key among them:

Further information on the five domains, including videos detailing each and the SWIFT project, are available online.

In addition to growing bodies of evidence and research showing inclusion in general education can improve educational outcome for all students and implementation of the SWIFT program in schools in five states, Sailor and McCart point out that support is growing at the federal level. Arne Duncan, secretary of education, has publicly stated that in regard to school inclusion, “all means all,” and other high-ranking education officials such as Michael Yudin, assistant secretary for the Office of Special Education and Rehabilitation Services, have supported his position. Melody Musgrove, director of the Office of Special Education Programs, stated “the stars are coming into alignment” for true inclusion, the inspiration for the article’s title.

Federal officials have shown a financial commitment as well, with the Office of Special Education and Educational Programs granting a $24.5 million award to KU to establish the SWIFT Center and to implement the SWIFT model in 64 schools as well as build state and district capacities to widely scale up and sustain the practices when the Center resources are no longer available to them. The grant, the largest in KU history, was part of a long line of recognition of KU’s leadership in the field. The university’s Department of Special Education is regularly rated No. 1 in the nation. While the stars are coming into alignment for increased inclusion in schools, Sailor said the results from schools that are already fully inclusive show that students can benefit.

“Our job is to carry the idea of inclusion down to the level of the kids in schools. If you look at a fully functioning SWIFT school, there are not these divisions. All students are fully connected to the general education curriculum and educational outcomes are better for all students,” Sailor said. “If you look at the five domains as five big pieces of a jigsaw puzzle you’ll see that when you get all five pieces in place as a coherent picture, you will get dramatic improvement.”