LAWRENCE — Thanks to the generosity of James J. Ascher Sr. and his wife, Mary Ellen, of Overland Park, a 1,000-piece collection of Jayhawks now has a permanent home at the University of Kansas. They will be displayed at the Kansas Union. The Aschers made a financial gift to KU Endowment to purchase the collection for KU. 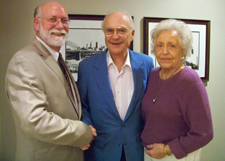 “I read that the Jayhawks would be sold online,” said James Ascher. “My wife and I talked about how a collection of a thousand Jayhawks really belongs at KU, and that we would hate to see the Jayhawks dispersed around the world. We think the Jayhawk is the most unique mascot of universities all across the country, and we firmly believe the collection should stay at KU.”

Ascher attended KU in the early 1950s until being drafted to serve in the Korean War. After his military service, he returned to Kansas, married and went to work for B.F. Ascher and Co., the Lenexa pharmaceutical firm his father founded in the 1940s. Ascher began his career there as a salesman and worked his way up to president; he retired as chairman in 2010. The family’s Jayhawk tradition has continued with two of their three children and a grandson: Jill (Ascher) Webb graduated from KU in 1978; James J. Ascher Jr. graduated from KU in 1979, and Carter Ascher is a freshman at KU. The Aschers' other son, Christopher Ascher, graduated from Rockhurst University in 1985.

For the past four years, the Jayhawks, then owned by Bud Jennings, of Lawrence, had been displayed in the Kansas Union. This summer, Jennings decided to sell his Jayhawks online, and Mike Reid, director of public affairs for the KU Memorial Unions, packed up the collection to return it to Jennings. During the process, Reid commented on the KU History Facebook page that the collection was leaving KU, and he added, “If you know of a donor who can fund the $130,000 purchase of the collection, let us know.” Within days, area media picked up the story, which is how the Aschers learned of it.

Reid is among the many who are celebrating the return of the Jayhawks, and he said that since August, people have been donating their own Jayhawks to KU. These will be added to the collection.

“I am so pleased that Mr. Ascher was able to step forward and support the KU history initiatives at the Unions,” said Reid. “The Jayhawk collection will be a lasting reminder for future generations of how beloved our unique mascot has been during the last 100 years, and how beloved it remains today.”

Make new friends, writes @SusanBlackSteen , but know that #KUdiscoveries from @KUCommStudies found that it will take… https://t.co/MLimzAZSIV
«»
Follow us on Twitter »
Why KU
Apply »
One of 34 U.S. public institutions in the prestigious Association of American Universities
44 nationally ranked graduate programs.
—U.S. News & World Report
Top 50 nationwide for size of library collection.
—ALA
5th nationwide for service to veterans —"Best for Vets: Colleges," Military Times