LAWRENCE — A $1.36 million gift from the estate of the late University of Kansas alumnus John P. Kaiser and his wife, Mary Kaiser, will provide scholarship support for KU journalism students. The gift will enhance the John P. Kaiser Journalism Scholarship Fund, which the Kaisers established in 2005 with a $500,000 gift to KU Endowment. 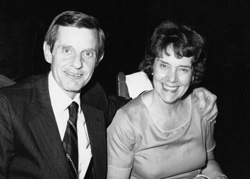 John Kaiser earned a bachelor’s degree in journalism from KU in 1951. He began his career as a journalist in the U.S. Coast Guard and later worked for Capper Publications in Topeka. He retired in 1986 as vice president of marketing for the magazine division of Dun & Bradstreet in Chicago. Mary Kaiser graduated from Fairmont State College (now Fairmont State University) in 1950. She began her career as secretary to the president of the Federal Bureau of Investigation and later worked at Bessemer and Lake Erie Railroad Co.

Ann Brill, dean of the William Allen White School of Journalism and Mass Communications, expressed appreciation for the gift. “The School of Journalism thrives because of the dedication and generosity of our alumni,” said Brill. “The Kaisers’ love for KU and the School of Journalism is humbling. Their gifts continue to provide our students with incredible opportunities to further their education, which is one of the best gifts we can give the future generations.”

Since 2005, the Kaiser Scholarship fund has supported nine students. The additional $1.36 million in support will allow the school to more than double the number of students benefiting from this fund.

“We strive to provide as many of our students with assistance as possible,” said Brill. “To receive a gift of this magnitude and be able to look to the future knowing the significant impact this gift is going to mean to our students is truly inspirational.”

In 2006, Scott Toland, Iola, became the first full-ride recipient of the Kaiser Scholarship. Toland said the scholarship opened doors for him, not only by removing a large financial burden that comes with attending college but by allowing him the opportunity to be more involved in the journalism school.

“When I found out about the scholarship, I really couldn’t believe it at first. It was so nice of the Kaiser family to give the scholarship, and I felt so honored to be named the first recipient,” Toland said. “It took some pressure off as far as having to have a job during college, so it gave me more time to get involved in the Daily Kansan, the television station. Looking back, I felt like it opened so many doors for me and allowed me to make the most of everything at the J-School.”

📝 Writers, do you have questions about language surrounding people with disabilities? @RTCILKansas has just release… https://t.co/8AjN2Jtgw6
«»
Follow us on Twitter »
Why KU
Apply »
One of 34 U.S. public institutions in the prestigious Association of American Universities
44 nationally ranked graduate programs.
—U.S. News & World Report
Top 50 nationwide for size of library collection.
—ALA
5th nationwide for service to veterans —"Best for Vets: Colleges," Military Times