LAWRENCE — A team of third-year students once again proved the University of Kansas School of Law’s moot court mettle on the highest stage, placing 15th in the world at the WTO International Moot Court Competition. 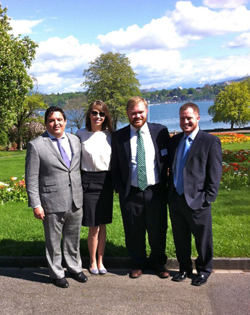 For the second time in five years, a KU Law team advanced to the world finals of the competition, held this year from April 30 to May 5 in Geneva at the headquarters of the World Trade Organization. Team captain Bruno Simões, of Lawrence; Ryan Thornton, of Sapulpa, Okla; Jade Martin, Rose Hill; and Matthew O'Neill, Tecumseh, represented the university, facing off against 20 other top teams from around the globe.

“The competition was wonderful,” Simoes said. “There is not much room for error in this competition, but that's also part of what makes it exciting. For me, it was certainly one of the most rewarding and worthwhile activities I did as a law student.”

KU Law’s team initially placed 12th, but recalculated scores after the competition had concluded placed the team at their final ranking.

To reach the finals, the KU Law team had to qualify in a competitive regional round that included teams from Harvard, Queen’s University and American University. After advancing to the semifinals in Costa Rica, they had just over a month to prepare for the final round. They spent that time strengthening their argument around this year’s moot court problem, which involved currency manipulation and discriminatory preferences in banking.

“The moot court problem this year was especially complex and contentious,” said team coach Raj Bhala, the associate dean for international and comparative law and Rice Distinguished Professor. “Just grappling with these issues, much less arguing about them cogently, showed the professional sophistication and maturity of the Jayhawk trade team.”

Although the experience was demanding, the rewards made the effort worthwhile. Once again, the students met and received feedback from top-tier judges, including former WTO officials. They took time to sightsee and visited a number of prominent organizations in Geneva, enjoyed the local cuisine, and socialized and networked with the other teams, coaches, and lawyers. Perhaps most importantly, they attended a WTO career panel and interviewed for international positions, and Simoes landed a job with a prominent international trade law firm in Brussels, FratiniVergano.

“The competition is much more highly regarded outside of the U.S., so if you're thinking of working abroad, it is definitely an activity in which you should try to take part,” he said.

The competition, a simulated hearing in the World Trade Organization dispute settlement system, is sponsored by the European Law Students Association (ELSA), the largest independent law students association in the world.

It has been an outstanding year for KU Law moot court teams in international competition. Earlier this spring, the Jessup International Law Moot Court team competed in the world finals in Washington, D.C., where they placed in the top 30. KU Law is one of only two schools in the country to advance moot court teams to the finals of both the WTO and Jessup competitions.