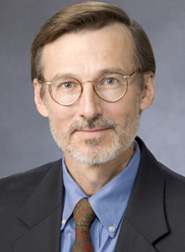 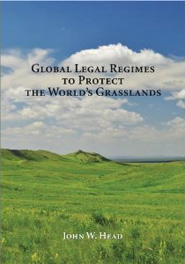 LAWRENCE — When people gaze out upon the world's grasslands, they may not be impressed at what they see. Yet, those ecosystems form a foundation for nearly all of Earth's life and have been compromised and destroyed at alarming rates. A University of Kansas law professor has authored a new book exploring grasslands around the world, how they have been degraded and what international law can and should do to protect these invaluable spaces.

John W. Head, Robert W. Wagstaff Distinguished Professor of Law, has published "Global Regimes to Protect the World's Grasslands," a book that examines the Earth's major temperate and tropical grasslands, why people should care about them, and some key legal and institutional efforts that have been made to respond to their destruction and regulate their use.

"Unlike spectacular coral reefs and majestic rain forests, grasslands would typically leave the ordinary person unimpressed," Head said. "After all, most of the 'action' and 'mass' in a grasslands area is hidden from view, beneath the surface of the earth. However, grasslands constitute a profoundly important aspect of our physical environment – important, that is, to the balance of nature on which all life depends. Healthy grasslands contribute very significantly to soil conservation, biological diversity, animal habitat, water treatment and the sequestration of carbon. In short, we should care about grasslands because they play such a central role in the health of the planet – and they have been deeply damaged over the past several decades."

Head, who grew up on a northeast Missouri farm, has been interested in agriculture throughout his life. Upon taking a sabbatical, he turned his expertise — international and environmental protection law — to examine his interest in grasslands and agriculture. The resulting book opens with a description of grasslands throughout the world, or areas that are grasslands in their natural state.

From there, the book examines legal regimes that have been put in place locally, nationally and internationally to protect these areas. Head investigates policies that have set aside land as offlimits to certain types of human activity such as building, farming, mining and even limiting intensity of grazing.

"As a general matter, what I found is that the protections in place – even in relatively wealthy countries such as the United States – are very spotty and paltry in most respects," Head said. "And it shows: the degradation and outright destruction of grasslands and prairies around the world is extreme, reflecting the fact that of all the major types of land cover around the world, grasslands have received the least legal and government protection."

Several national legal systems, such as those of Canada, China, Turkey, the United States and the European Union have implemented law and policy to attempt to balance development — which in many cases is outright destruction of grasslands — and preservation. Head argues that these efforts, while attempting to strike a balance between common needs and individual property rights, have often done nothing to prevent, and in some cases have exacerbated grassland degradation.

Head also offers recommendations for legal and policy action that could and should be taken at local, national and international levels to more robustly protect grasslands. Given his background in international law, he focuses largely on international efforts. International trade law has shown the practice of "conditionalizing" treaty benefits to be effective. For example, no nation can gain benefits of membership in the World Trade Organization without implementing key elements of the most important intellectual property treaties that protect patents and trademarks. Similar initiatives might be undertaken, Head says, to "conditioalize" participation in other important international treaty regimes in a way that would greatly expand the protection of grasslands — and this would be consistent with a range of environmental protection measures that have emerged in the last few decades.

Much of the world's grasslands have been severely degraded, but Head said he plans to continue research into how law can play a role in stopping and reversing those trends. Legal and cultural cooperation could help protect such delicate, yet vital ecosystems.

"I would very much like to explore further the sorts of efforts that could be made – locally, nationally and globally – to protect grasslands and prairies," he said. "After all, we live here in Lawrence at the edge of some of the world's best remaining prairies."