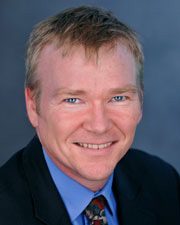 LAWRENCE — Alzheimer's disease, the devastating condition that leads to dementia and eventual death, has long baffled researchers with its complexity. One hallmark of the disease involves a deformed protein called tau that spreads from brain cell to brain cell.

"It's believed that somehow the accumulation of these proteins actually kills the neurons," said Chris Gamblin, associate professor of molecular biosciences at the University of Kansas. "Because neurons can't reproduce any more, you can't replace those cells. As you lose more and more the effects on memory, language, executive function get worse and worse over time."

In a healthy brain, tau helps to stabilize long connective portions of neurons dubbed microtubules. But within the brain cells of Alzheimer's sufferers, tau builds up and forms tangles that eventually cause the cell to die.

"In Alzheimer's disease, something goes wrong," said Gamblin. "We believe tau is somehow misfolding, and this misfolding results in it aggregating. What we don't know right now is if the problem with tau is a toxic loss of function, in that it can no longer stabilize microtubules, or if it's a toxic gain of function, in that these aggregated proteins have an intrinsic toxic property themselves, by doing things like changing the membrane to make it more porous."

Recently, Gamblin and his colleague Mel Feany of Harvard University received a $1.7 million grant from the National Institutes of Health to study tau. While Gamblin studies tau proteins he produces in E. coli bacteria, Feany researches the effects of tau in the brains of fruit flies.

"We came up with this idea of trying to look at different species of tau," said the KU researcher. "I've gotten good at modeling what the aggregates inside the fruit flies are going to look like. I can give her ideas of what type of proteins to express. As she does that, she may find things that are interacting with tau. She can say, 'We found this new protein that's interacting with tau,' and I can go into the test tube and try to figure that out."

The most difficult part of the investigation is working with tau itself, which Gamblin likens to "a piece of cooked spaghetti that just flops around."

"Tau falls into a class of proteins that people refer to as 'natively unfolded,'" he said. "It really doesn't have a regular structure that we can measure in solution. It makes it difficult to express and purify. When you do an experiment, it's not easy to get the same outcome every time you do it. There's a lot of variation within the protein. It doesn't like to behave."

But the difficulty of the work is far outweighed by the potential benefits to understanding tau's role in the spread of Alzheimer's, which afflicts as many as 5.1 million Americans. Gamblin said the eventual goal of his investigation would be to develop new and effective therapies to treat the disease.