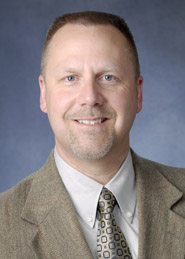 LAWRENCE — A major contributor to two high-profile early-stage drug discovery programs at the University of Kansas is the 2012 recipient of KU’s Research Achievement Award. The award is the highest honor given annually to a full-time academic staff researcher working in a department or research center on KU’s Lawrence campus.

Frank Schoenen [SHAYN-en] is associate director of the Specialized Chemistry Center, a position he’s held since 2008. He was earlier the associate director of the Chemical Methodologies and Library Development (CMLD) Center from 2005 to 2009. He also holds a research associate professor position with the Higuchi Biosciences Center and a courtesy associate professor position with the Department of Medicinal Chemistry.

Schoenen will be recognized at 3:30 p.m. Wednesday, May 2, in the atrium of the Shankel Structural Biology Center on west campus. The award – including a plaque and $10,000 in research funds – will be presented by Steve Warren, vice chancellor for research and graduate studies.

The Specialized Chemistry Center was established in 2008 with a six-year, $23.2 million grant from the National Institutes of Health as part of the nationwide Molecular Libraries Probe Production Centers Network. The CMLD was established in 2003 with a $9.5 million NIH grant and renewed for $9.5 million in 2008. Both centers are directed by Jeff Aubé, professor of medicinal chemistry, who nominated Schoenen for the award.

“Frank is a talented, hard-working and generous scientist who deserves a lion’s share of credit for any success these centers have achieved,” said Aubé. “He has been a major contributor to both and has steadily built an enviable reputation in his field of organic medicinal chemistry.”

Also supporting the award nomination was John Porco, professor of chemistry at Boston University and director of its CMLD. He praised Schoenen’s “high level of rigor, productivity, team orientation and visibility in the organic synthesis and medical chemistry community,” as reflected in co-authorship and co-inventorship on numerous publications and patent applications.

Schoenen came to KU in 2005 following a career in private industry. He was a research scientist with Glaxo Research Institute and its successor companies from 1990 to 2002, after which he was vice president for research chemistry and operations with Nuada Pharmaceuticals for three years. He started at KU in the CMLD as director of the Synthesis Core and associate director in the Administrative Core.