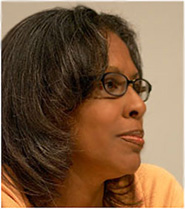 LAWRENCE — A University of Kansas research group dedicated to recognizing black writers is collaborating with others to revive interest in a visionary poet who was part of a pocket of U.S. expatriate cultural history centered in Sweden in the 1960s.

“We all know about colonies of black artists, musicians and writers in Paris and Moscow, but we don’t know as much about those who moved to Sweden or other parts of Europe ,” during the post World War II years, said Maryemma Graham, founder of the Project on the History of Black Writing and a professor of English at KU.

Black expatriates in Sweden included Allen Polite, a poet and artist, who shortly after publishing a few of his early poems moved from New York to Stockholm in 1963.

He was among African-American writers, artists and musicians seeking refuge from racism and a haven for aesthetics, Graham said.

Polite was 60 when he died of cancer in 1993, leaving hundreds of poems in original handwritten texts as well as paintings and drawings. His widow, Helene Polite, in Stockholm, has worked to “bring his work to the attention of a wider audience.”

Polite’s work is part of a broader cultural story of the black writers and artists in the post-war years, yet little has been written about him or the Stockholm colony, Graham added. Polite’s friend and art mentor, Harvey Cropper, is the only remaining member of the Stockholm group from that era.

“If we understand that an active and diverse community of writers existed abroad where they continued to make significant contributions to literature and the arts in vastly different ways, the global appeal of black writing and cultural expression does not seem so unusual today,” Graham said.

“The seeds were sown by people like Polite, who never returned to the United States, but gave poetry a voice for others to hear.”

The question of race complicates the voice, she said. “Perhaps because the focus in the United States was on race, we didn’t bother to look at poets whose work did not foreground race in the same way.”

Polite’s poem “Why They Are in Europe” hints that art is apart from race or allegiance:

“Each is an artist first and has no flags in his pocket.”

At the time of his death only a few of Polite’s early poems had been published -- in part because for years he was not interested in publishing. His widow noted in the forward of one volume of his work that her husband, anticipating a longer life, had set aside plans to publish his work for later in his career.

In 1996, Helene Polite privately published three volumes of her husband’s work: “Poems,” with some of Polite’s art, including a self-portrait; “The Rice and Fiol of the Turd Rake,” a rhapsodic play for three voices; and “Looka Here, Now!, and other poems from the 1950s.” All are out of print.

Born in New Jersey in 1932, Polite had attempted to live and work in New York City after his service in the U.S. Army in Korea and Japan. He lived in Greenwich Village, studied philosophy at Columbia University, became part-owner of Orientalia, a Village bookstore, and worked as a cryptographer for the United Nations. When he wasn’t working or studying, Polite was writing poetry and sharing thoughts with the Hipsters, the intellectuals who gathered in coffee houses and flats to discuss art, poetry and philosophy in the Village during the 1950s.

His childhood friend LeRoi Jones, more famously known as Amiri Baraka, first published Polite’s poetry in 1958 in the magazine ‘Yugen. In the “Autobiography of LeRoi Jones,” Baraka refers to Polite as his mentor. Polite’s writings also appear in “Sixes and Sevens, An Anthology of New Poetry,” published in 1962 and in Langston Hughes’ “New Negro Poets, U.S.A.,” 1964. Like a number of black writers in the early ‘60s, Polite served his apprenticeship as a beat poet before he became identified with the Black Arts Movement.

Recovering Polite’s work is a collaborative effort, Graham said. The Project on the History of Black Writing is working with archivists to get his work entered into poetry databases and with scholars to broaden interest in his work and the Swedish colony.

The Project on the History of Black Writing has been in the forefront of research and inclusion efforts in higher education for 29 years. Founded in 1983 at the University of Mississippi, Oxford, the Project moved to KU in 1999 and is the only archive of its kind dedicated to literary recovery, professional development and public outreach. A major goal is to collect every novel ever published by an African-American writer.