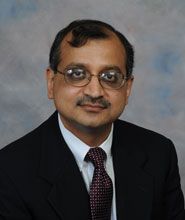 LAWRENCE – It’s a common risk-versus-reward question in business: How much inventory should you pre-sell at a conservative price, and how much should you retain and try to sell later at a higher price?

A University of Kansas researcher has potentially cracked the code with regard to TV advertising sales.

Suman Mallik, an associate professor in the KU School of Business, has developed a model that will enable TV networks to better judge whether to pre-sell ad space before the beginning of the broadcast year at fairly conservative prices or hold out for potentially higher prices later in the year. The quantitative model could be a powerful tool for an industry that often makes advertising sales decisions based largely on qualitative judgment and risk tolerance of industry executives.

“Broadcast network executives typically use their experience and best guesses to decide when, and at what price, to sell ad space for the upcoming year,” Mallik said. “To their credit, they’ve been reasonably good at it so far. But our research gives them a quantitative tool to help make these decisions with more precision. And in a multi-billion-dollar industry like TV advertising, precision can mean a lot of money.”

The five major U.S. television networks sell their advertising inventory during two distinct periods: the “upfront” market, which occurs before the broadcast season, and the “scatter” market, which occurs during the broadcast season. The inventory is priced based on the ratings of the TV show attached to the ads, which of course are unknown until the show actually airs. Thus, a television network must allocate its total inventory to these two markets before knowing either the ratings for its upcoming shows or the scatter market price.

Generally, networks offer lower prices on inventory sold on the upfront market. In addition, upfront sales come with “ratings guarantees,” which means the network will air additional commercials for the client if the show attached to the commercial doesn’t achieve a certain rating. By comparison, scatter market prices are often higher and rarely come with a rating guarantee.

“There’s uncertainty for the buyers and sellers alike,” Mallik said. “Nobody knows the ratings of the shows until they actually air, so nobody knows the exact value of ad space, or when to buy or sell it. That’s where our predictive model can help.”

Mallik’s model is believed to be the first-ever attempt to bring quantitative methodologies to the planning of TV ad sales. The model incorporates variables such as a network’s risk tolerance, the performance uncertainty of TV shows and the revenue uncertainty of the scatter market. While other researchers have examined decisions in which the main source of uncertainty is consumer demand, Mallik’s model is unique in that it also incorporates uncertainty in supply – in this case, the supply of viewers, as measured by ratings. Mallik and his co-author have filed for a United States patent based on two related papers.

“A quantitative methodology provides an enormous improvement over a qualitative judgment,” he said. “A large network like NBC will typically book revenues worth $2 billion to $2.5 billion during the upfront sales season. Thus, even a one-percentage-point deviation from the optimal expected revenue will represent millions of dollars.”

In addition to potentially becoming a powerful predictive tool for network executives, Mallik’s model provides an explanation for industry behavior up to this point. For instance, the model explains the common practice of selling 60-80 percent of total inventory during the upfront market. That percentage, he says, has been driven in part by networks’ risk aversion and desire for early recovery of the significant costs of developing TV programs.

“Networks spend a lot of money to make new shows,” he said. “So there’s often a tendency to want to sell the bulk of your ad space as early in the year as possible to get some money on the books based on upfront sales, rather than take a chance and sit on it for potentially higher prices later.”

Not all shows are new in any broadcast year. For example, the famed show “Seinfeld” ran for nine seasons. According to Mallik’s model, when a network starts a new broadcast year with a stable lineup of hit shows and only a few new shows, the network tends to make fewer ad slots available to the upfront market – and will command a higher price for those fewer slots. The buyers, on the other hand, will be highly interested in buying commercial slots on such a network. For example, Fox sold less upfront inventory in 2005 after leading all networks among 18-to-49-year-old viewers for the previous broadcast season.

Mallik’s model also demonstrates that the probability of a network leaving money on the table increases as the show performances become hard to predict. This happens when a network enters a broadcast season with new shows. In these cases, it is optimal for a network to sell more on the upfront market only if the target revenue is set very aggressively. Otherwise, a firm should sell less during the upfront season. This was the case with ABC during the upfront season of 2004, when it underestimated the impact of the first seasons of the shows “Desperate Housewives” and “Lost” and sold more inventory on the upfront market, leaving money on the table.

“In that specific case, we suspect ABC probably didn’t set its target revenue very aggressively, which made the practice of selling more on the upfront market suboptimal,” Mallik said. “ABC learned that year that it pays to take risks in programming.”

Mallik says his model could have applications in other industries and in other scenarios in which both the supply and demand are unknown. For example, agricultural producers could use it to determine whether to pre-sell crops at a conservative price or hold out for higher prices later in the year. Or it could be used by publishers deciding whether to offer a discounted price on inventory purchased before the selling season and a higher price for replenishments during the selling season.

“It’s a robust model,” Mallik said, “and we think it could have a number of applications for decision-makers in various industries. For now, though, we’re excited about its application in the TV advertising industry.”