LAWRENCE — A faculty member at the University of Kansas College of Liberal Arts & Sciences has been elected a fellow of the prestigious Royal Society of Arts. 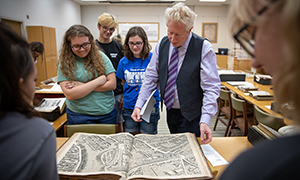 Paul Scott, associate professor of French, has been at KU since 2004. The honor recognizes his work as an editor of “The Year’s Work in Modern Language Studies,” an annual digest of scholarly work about modern languages, excluding English.

“This is a great honor that reflects highly upon Paul’s scholarship and his work with this publication. I am pleased to congratulate him for this recognition,” said John Colombo, interim dean of the College.

“The Year’s Work in Modern Language Studies” has been published since 1930, and it features scholarship on a gamut of languages, including Latin, Gaelic, French, German, Spanish and more. Scott became a section editor in 2010 and was named the journal’s general editor in 2016. In recent years, Scott has worked to expand the journal’s range to include Native American languages and cultures.

The mission of the journal is important, Scott said, “especially today, where identity is so tied into language.”

“It’s definitely an affirmation of the work of the journal,” he said of the RSA’s recognition. “One of its specific missions is to safeguard and promote minority and endangered languages. We’ve now got sections devoted to Yiddish and some of the Celtic languages, such as Manx,” a language once spoken on the Isle of Man.

At KU, Scott works on 17th century French literature with a secondary focus on science fiction. He currently holds a Keeler Intra-University Professorship and is working on a book-length project, “Cognitive Cadavers: The Evolution of the TV Zombie,” dealing with television shows from the U.S., United Kingdom, France and Australia that feature sentient, humane zombies. Previously, he was elected as a Fellow of the Royal Historical Society in 2010 and as a Fellow of the Chartered Institute of Linguists in 2019.

“I think KU has been an institution that has always promoted this work I’ve done and encouraged it,” Scott said. “I didn’t do this alone. I did it with the help of KU, so I think this reflects on KU as well.”

The Department of French, Francophone & Italian Studies is one of more than 50 departments, programs and centers in the College of Liberal Arts & Sciences. The College is the heart of KU, educating the most students, producing the most research and collaborating with nearly every entity at KU.