OVERLAND PARK – A new agreement between the University of Kansas and Metropolitan Community College significantly reduces the financial and time commitment barriers that community college students face in completing their education at a four-year institution. 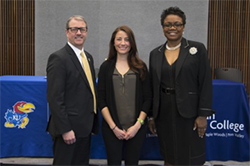 “This agreement gives our students more options and knocks roadblocks out of the way,” said MCC Chancellor Kimberly Beatty. “It’s also an example of how MCC and KU are working across state lines to save students time and money.”

Higher education, K-12 and community leaders from both sides of the state line gathered to witness Beatty and KU Chancellor Douglas A. Girod sign a proclamation April 23 at the KU Edwards Campus in Overland Park. 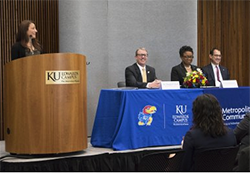 “I believe this agreement will give renewed vitality to the process of obtaining a degree for students in the Kansas City metro area,” said Jessica Hammer, exercise science student at the KU Edwards Campus who transferred from MCC. “It benefits students by allowing them to complete their education with flexibility and affordability through a partnership that prioritizes student success."

“MCC and other community college students have succeeded at KU and the Edwards Campus for many years,” said David Cook, Edwards Campus executive vice chancellor. “This proclamation makes their transition smoother and potentially less costly. We’re excited to serve more of them and, by extension, further serve the Kansas City metro.”

Two of the largest education systems in the area, MCC and KU share similar missions to build the Kansas City workforce, foster lifelong learning and equip students with the tools they need to succeed. This new pathway, along with KU’s MetroKC rate at its Edwards Campus, delivers an attainable way for Kansas Citians to further their education and advance their careers.

“It is not only our responsibility to provide high-quality education, but also to increase access for students,” Girod said. “As a former community college student, I can personally vouch for the value in supportive pathways throughout one’s educational journey. We are thrilled to formally work with MCC to provide more tools for student success.”

See a Facebook Live recording of the event here.