LAWRENCE — The Center for Russian, East European & Eurasian Studies has announced that this year’s Roy D. and Betty Laird Essay Contest winners are Matti Dimmick in the undergraduate essay category for her essay “Putin’s Gendered Political Discourse” and Steven Mutz in the graduate essay category for his essay “Back to a Future USSR: Worth the Cost?”

Now in its 26th year, the annual essay contest is named after the late Roy Laird, a longtime member of the Russian & East European studies (REES) and political science faculties, and Betty Laird, whose support makes this prize possible.

A committee of three REES-affiliated faculty read and independently rated the anonymous essays submitted for the contest. According to the reviewers, Dimmick’s essay “has a fascinating topic, clear argument and provides plenty of supporting evidence.” Mutz’s essay “engages a topical issue and provides a thoughtful analysis of the symbolic war in the Eastern Ukrainian media, situating it in the historical context of the Soviet Union.”

As the undergraduate recipient of the award, Dimmick receives $250 award, whereas Mutz, as the graduate recipient, receives a $500 award and a book budget of $75. Their essays will be published on the CREES website. 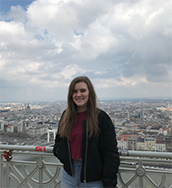 Matti Dimmick is a major in anthropology and Slavic languages & literatures (Russian) with a minor in music. She moved often growing up as a part of a military family, graduated high school in Tbilisi, Georgia, and has family in Overland Park. In addition to her two majors, Dimmick has taken coursework in political science, international studies, and women, gender & sexuality studies with a keen interest in discourse analysis and feminist criticism. 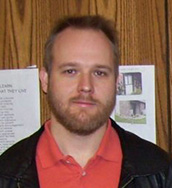 Steven Mutz is from Lawrence. He is currently finishing the final semester of his doctorate in political science and will soon defend his dissertation. He teaches American history at Metropolitan Community College and U.S. government at Highland Community College. His academic interests are interdisciplinary in nature and center around the fields of international relations, American and European history, and nationalism — particularly identity politics, the uses of political memory, mythology and nostalgia in political messaging and propaganda, and great power competition.

KU in the news
PolitiFact — Thu, 05/19/2022
The US government is not creating food shortages, despite claim about buffalo killed in the 1800s
BBC — Wed, 05/18/2022
The endurance of Japan's simple street snack
RT @UnivOfKansas : Feeling lonely? Jeffrey Hall, a KU professor of communication studies, gives the New York Times his take on how many frie…
«»
Follow us on Twitter »
Why KU
Apply »
One of 34 U.S. public institutions in the prestigious Association of American Universities
44 nationally ranked graduate programs.
—U.S. News & World Report
Top 50 nationwide for size of library collection.
—ALA
5th nationwide for service to veterans —"Best for Vets: Colleges," Military Times