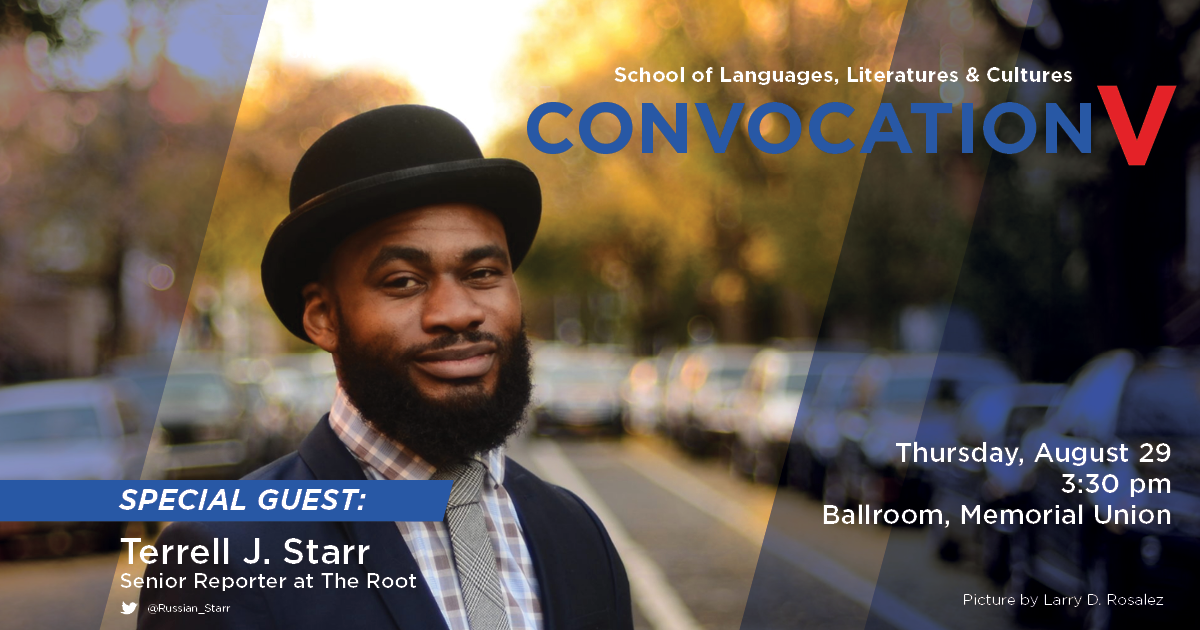 LAWRENCE — A convocation Aug. 29 will mark the fifth anniversary of the University of Kansas School of Languages, Literatures & Cultures (SLLC), and the school has invited a journalist and expert in U.S.-Soviet relations to speak at the event.

Terrell Starr, senior reporter at The Root, will take part in a discussion at 3:30 p.m. Aug. 29 in the Kansas Union Ballroom. A speaker of Russian and Georgian, he has over four years of experience living in the former Soviet Union and more than eight years working as a reporter. He is a frequent commentator and co-host of “In The Thick,” a political news podcast that brings news from a person of color perspective, and his work on Ukraine and Russia has appeared in BuzzFeed, The Daily Beast, The Washington Post and The New York Times. Starr will be interviewed on stage by Nicole Hodges Persley, associate dean for diversity, equity & inclusion.

“Mr. Starr brings us the perspective not just of a person whose knowledge of languages – Russian and Georgian, in his case – has transformed his life and career, but also of a person of color, whose experience of the world helps us to focus on critical social questions of our time,” said Marc Greenberg, SLLC director.

The event is free and open to the public. More information is available here.

The KU School of Languages, Literatures & Cultures was established in fall 2014 and emphasizes the central importance of language and culture for a 21st-century education in a globalized world. At KU, some 40 languages are taught on a regular basis, as well as courses on culture, literature, history and politics connected with many of those languages. KU is a national leader in the study of foreign languages, offering more languages than any other university in the Big 12 Conference.

KU in the news
The New York Times — Thu, 10/06/2022
Meeting the mental health challenge in school and at home
Time — Wed, 10/05/2022
Why Native Americans are dying sooner (column)
RT @AAUniversities : A milestone report from the @UnivOfKansas and @UCLA appearing this week in the Proceedings of @theNASEM proposes a new…
«»
Follow us on Twitter »
Why KU
Apply »
One of 34 U.S. public institutions in the prestigious Association of American Universities
44 nationally ranked graduate programs.
—U.S. News & World Report
Top 50 nationwide for size of library collection.
—ALA
5th nationwide for service to veterans —"Best for Vets: Colleges," Military Times