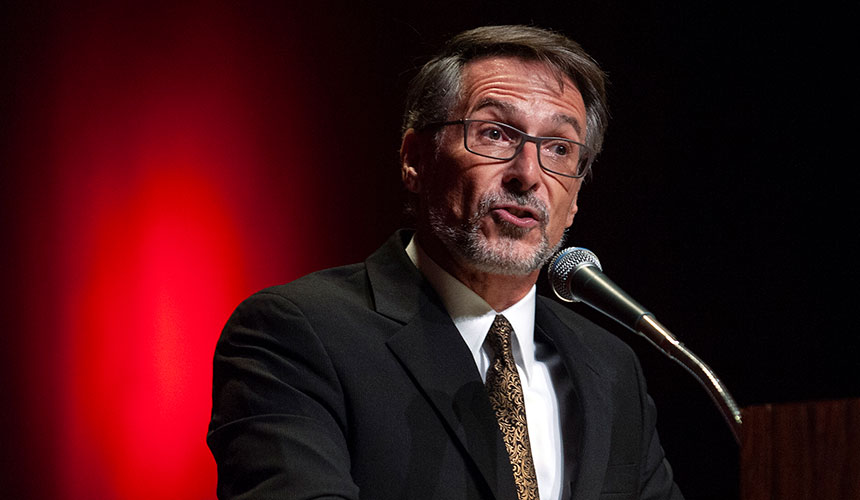 The Hall Center is a focus of intellectual life for scholars in the humanities, arts and humanistic social sciences at KU and for members of the surrounding community. It is one of 12 designated research centers that fall under the KU Office of Research.

“I could not feel more excited about becoming the next director of one of this nation’s leading centers for the humanities,” Godbeer said. “I look forward to continuing and expanding the Hall Center’s stellar record in supporting world-class humanities scholarship at KU. It will be my mission to foster interdisciplinary conversation across the university, to showcase the relevance of humanities scholarship, and to engage our colleagues, students and neighbors with all that is exciting and important in the humanities – reaching out into Lawrence and the surrounding communities. The humanities have a crucial role to play as we head further into the 21st century, and KU’s Hall Center for the Humanities can lead the way.”

In addition to directing the Hall Center, Godbeer will serve as the Charles W. Battey Distinguished Professor in the Department of History. His research focuses on religious culture and issues of gender and sexuality in colonial and revolutionary North America.

“I’m excited about the experience that Dr. Godbeer will bring to KU,” said John Colombo, interim vice chancellor for research. “He has created a thriving humanities center from the ground up and championed the value of the humanities as they’ve come under increasing attack. I am confident that he will build upon the good work of his predecessors and take the Hall Center in exciting new directions.”

At Virginia Commonwealth University, Godbeer has served as director of the Humanities Research Center since its launch in 2014. Under his leadership, the center’s visiting speaker series has become a nexus of intellectual conversation at the university, featuring such notable guests as Cornel West, Natasha Trethewey and Bob Woodward. Godbeer has also created programs that connect students and community members with VCU faculty authors, enable faculty to engage across conventional disciplinary boundaries, and provide research and travel funding to support faculty as they build and sustain their careers.

Godbeer is the author of five books, including “The Devil’s Dominion: Magic and Religion in Early New England,” “Sexual Revolution in Early America” and “The Overflowing of Friendship: Love between Men and the Creation of the American Republic.” His forthcoming book, “World of Trouble: A Philadelphia Quaker Family’s Journey through the American Revolution,” will take readers into the tumultuous world of a late 18th-century mercantile Quaker couple who lived in Philadelphia during the revolutionary period.

Godbeer has been awarded research fellowships by a range of institutions, including the National Endowment for the Humanities, the American Philosophical Society, the Ford Foundation, the Andrew W. Mellon Foundation and the Society for Historians of the Early American Republic. He holds a bachelor’s degree in history from Oxford University and a doctorate in history from Brandeis University. He previously taught in the history departments at the University of California, Riverside, and the University of Miami.

“I am grateful to the search committee, led by Foundation Distinguished Professor Beth Bailey, for their time and effort in attracting an outstanding pool of candidates and successfully recruiting Dr. Godbeer to KU,” Colombo said. “I would also like to thank professors Clarence Lang and Marta Caminero-Santangelo for their engaged leadership of the Hall Center in interim capacities as we worked to identify a permanent director. This role is critical to KU’s continuing excellence in humanistic inquiry and interdisciplinary scholarship.”