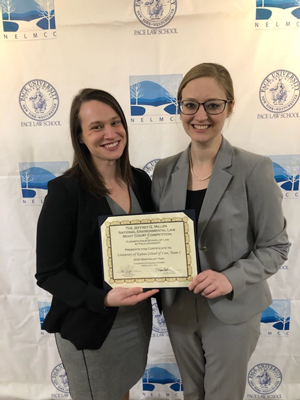 Fifty-five teams from law schools across the country competed. Lustman and Stanley tied for second place with a team from American University Washington College of Law.

“The achievement of making it to the final round of the NELMCC cannot be overstated. This competition — renowned for its challenge — gives our students a chance to argue in front of judges of the highest caliber,” said Uma Outka, team coach and KU Law’s associate dean for faculty.

NELMCC was held at Pace University’s Elisabeth Haub School of Law on Feb. 20-22. In preliminary rounds, Lustman and Stanley argued before a former general counsel for the U.S. Environmental Protection Agency; the current ranking member of the environment committee in the Connecticut legislature; FEMA attorneys; the mayor of White Plains, New York; and a United Nations environmental law consultant.

“The KU Law team was nothing short of excellent – a credit to Hannah and Diana’s hard work and talent, as well as to the strength of KU Law’s moot court program,” Outka said.

The NELMCC competition tests students’ knowledge of environmental law by evaluating their legal writing and oral advocacy skills while providing a firsthand experience in environmental litigation. This year’s competition involved a hypothetical problem related to the Endangered Species Act (ESA). The KU students had the opportunity to reference an important law review article on the ESA, which was written by recently deceased KU Law Professor Emeritus George Coggins.

“This was a special competition in that not only were we citing to Coggins in our brief and arguments, but we were in the unique position of having other teams quote a KU Law professor right back to us,” Stanley said. “All in all, participating in the competition was probably the most rewarding educational experience I have had in law school.”

Team members prepared for the competition by researching and preparing briefs and participating in practice rounds judged by KU Law faculty, alumni and peers.

“Competing at Pace was the highlight of my time at KU Law. Diana and I got to prepare with so many KU Law professors and alums we admire and respect, and we took something from each of them into our arguments,” Lustman said. “That preparation was critical because the judging at Pace is top-notch.”

“The competition rewards deep knowledge of the legal issues. The judges are extremely knowledgeable in their field and they ask hard questions,” Stanley said.