LAWRENCE — A new laboratory opening this fall at the University of Kansas School of Engineering will provide a state-of-the-art environment for aerospace engineering students to design and build launch-worthy satellites. 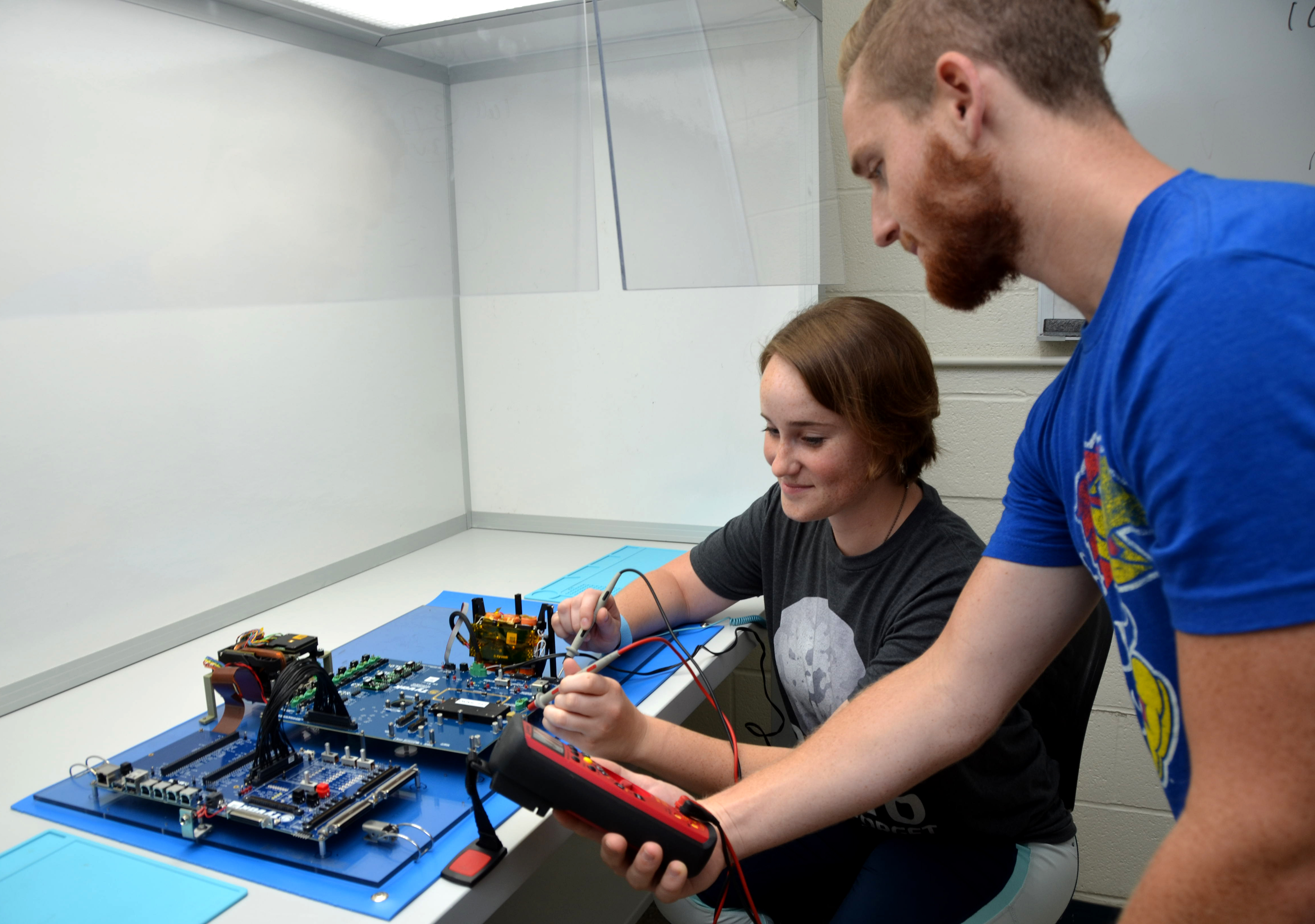 The Hill Space Systems Laboratory in Learned Hall features a 12-by-12-foot clean “white room” where students don protective clothing while they build nano-satellites, which weigh in at just under 10 kilograms, for a planned launch into Earth orbit. A second room in the same lab is stocked with computer equipment so students can design and test their creations.

“We're hoping to have student satellite launches — microsatellites, nano-satellites — every other year,” said Rick Hale, Spahr Professor and chair of the Department of Aerospace Engineering. “The first launch could be as early as spring 2020.”

KU engineering students have long sought to build and launch their own small satellite into space. In 2006, there were plans to launch a satellite under the CubeSat program, which launches nano-satellites from universities and other institutions around the country. Those plans called for the satellite to be launched from Kazakhstan, aboard a Russian rocket, but that launch failed on the way to orbit.

More recently, a student-led team had an application accepted to participate in NASA’s CubeSat Launch Initiative (CSLI), which launches small payloads beyond Earth’s atmosphere. CubeSats are built-in units of 10-by-10-by-11 centimeters and contain as many as six units.

The KU satellite is being built on a platform provided by Tyvak Nano-Satellite Systems, whose chief operating officer, Marco Villa, was the student who led KU’s 2006 launch effort. The satellite will contain three units:

There are six students currently working on the project, Hale said.

The new laboratory is part of an effort at KU to expand its prestigious aerospace program to include more programming for students interested in space exploration. The School of Engineering also hired a new faculty member to aid in the effort.

“About half of incoming students are interested in astronautics, and about half are in for aeronautics. NASA is very good at inspiring the next generation,” Hale said. “Then there is an increase in jobs and opportunities as well. So there has also been an increase on the outgoing side of students who want to work in this space.”

The new laboratory was made possible by a gift from Ron Hill, president of the Hemco Corporation in Kansas City, Missouri, and his wife, the late Sue Hill, as well as a matching gift from Hemco. The couple also made possible the Hill Engineering Research and Development Center, which opened at KU in 2013.

“They've been stalwart supporters of the School of Engineering,” Hale said. “This gift can be transformational for our department. This enables us to do something that we couldn't have done before."

KU in the news
The Washington Post — Mon, 02/03/2020
Vladimir Putin follows a long Russian tradition of enlightened autocrats
National Public Radio — Sun, 02/02/2020
Making Super Bowl guacamole? Be careful to avoid the pits of an avocado hand injury
Preserving historic landscapes and the buildings within them is not about conservation at all costs, says an… https://t.co/UB3aqnEhz8
«»
Follow us on Twitter »