LAWRENCE — A University of Kansas professor has been recognized with one of the highest honors awarded in the field of medical and biological engineering. 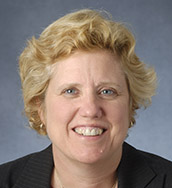 “It’s a recognition of the kind of research we do at KU — not just me, but other faculty in bioengineering, pharmacy and chemistry,” Lunte said. “It’s nice to be recognized by people outside KU.”

Lunte’s appointment at KU is split between the departments of Chemistry and Pharmaceutical Chemistry, and she is also a member of the Bioengineering Program. Her research involves the development of microfluidic “lab on a chip” miniature devices that can be used for continuous monitoring of drug and neurotransmitters and investigating neurological diseases.

She was nominated, reviewed and elected by peers and members of AIMBE’s College of Fellows for “outstanding contributions to high-performance, miniaturized electrophoresis-electrochemistry systems to elucidate the physiological roles of biomolecules and her commitment to mentoring.”

The honor is “recognition for the multidisciplinary work that my group does,” Lunte said. “Over the years, my group has included graduate and undergraduate students in chemistry, pharmaceutical chemistry and bioengineering.”

Cross-disciplinary research “is a lot of fun, actually,” she said. “It’s nice because it lets you think out of the box and see other perspectives on your research. Also, the students and postdocs bring their unique perspectives. It’s a great way to learn new things and tackle problems you couldn’t solve if you are stuck with one set of tools and ideas.”

Lunte was also gratified by the recognition of her mentoring abilities.

“I’ve had a lot of students and postdocs do well in industry and academics,” she said. “I think that’s a key part of the job.”

Lunte has been at KU since 1987. In addition to directing the Adams Institute of Bioanalytical Chemistry, she is also the director of the NIH COBRE Center for Molecular Analysis of Disease Pathways.