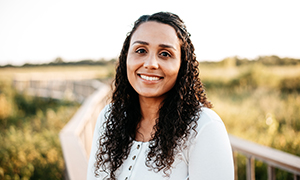 The fellowship is awarded to doctoral students from select institutions who are pursuing topics on the role of government in a free society, public service, public policy and an improved understanding of the U.S. role in world affairs. The $10,000 award will support Cole in the completion of her dissertation, "Professionalization of Black Medicine: Kansas City, 1900," which focuses on Black physicians and communities in Kansas City in the early 20th century whose work contributed to the development of the Black medical profession in the Midwest.

Cole’s research examines the movement of African American physicians into Kansas City at the turn of the 20th century and their work in founding hospitals dedicated to the care of Black populations in the area – as many hospitals were segregated at the time – and the ways the surrounding communities supported what she has termed the Kansas City Black Hospital Movement.

“Cole’s research gives us the rich history of Black medical care during the Jim Crow years in metro Kansas City. Gathering fugitive sources, she tells the stories of institutions and leaders, but also of grassroots organizing by the communities served,” said David Roediger, professor of history and American studies and Cole’s dissertation co-adviser along with Shawn Alexander, professor of African and African-American studies. “Attentive to gender within the dramas she captures, Cole situates matters in the terrible history of segregation but also shows how resilience and healing confronted oppression.”

“Black communities, women’s clubs and other philanthropists in the Kansas City area all played a role in supporting the development of the hospitals and the movement of Black physicians to Kansas City,” Cole said. “This support also included the funding and development of training schools for nurses that Black women could attend.”

Katie Batza, associate professor in women, gender & sexuality studies, who studies LGBTQ medical activism and infrastructure in the final decades of the 20th century, said that “Cole’s research adds an exciting new piece to the larger historical study of the ways marginalized communities responded to the physical and emotional harms imposed upon them by systems of oppression.”

In her application for the fellowship, Cole connected the importance of community in her research to her recent experience as a community involvement coordinator for the Region 7 Environmental Protection Agency in the Kansas City area. “Much of my work centered on meeting with communities, listening to their questions and concerns, relaying these back to my agency and connecting communities to governmental information, programs and resources — especially communities affected by events such as chemical spills and accidents.”

Cole noted that foundational to her work as a coordinator was understanding how to foster trust between these affected communities and the federal government, as well as the EPA office.

Cole credited much of her success as a pathways intern and coordinator to the skills she has developed as a graduate student. She noted how well her communication, leadership and research skills translated to her work with the agency, not only in her interactions with communities in Region 7, but also in her work publishing news features for the Region 7 Office of Public Affairs.

Originally from Garden City, Cole earned a bachelor’s degree in history with a minor in African and African-American studies from KU and was a McNair Scholar. She expects to complete her doctorate at KU in 2022 and is exploring careers in public service and academia.