LAWRENCE — A longtime University of Kansas professor has been honored with an award to recognize his career achievements in aerospace engineering education. 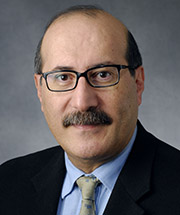 “Dr. Farokhi has been a distinguished and exemplary member of our engineering family,” said Rick Hale, chair of KU’s aerospace engineering program.

“It’s a humbling experience — it is an honor for the institution I serve, and all the colleagues and friends who contributed to it,” said Farokhi, who officially retired from KU in December 2019. “It’s a collective award; it’s not just personal. One doesn’t work in a silo — we all contribute to each other, team teaching and learning from each other.”

Farokhi started his KU career in May 1984 after a stint in the private sector as a design and development engineer for Brown, Boveri & Co. in Switzerland. During his time at KU, Farokhi served as director of Flight Research Laboratory for five years, acting chair of the department in fall 1991, director of the graduate division for the College of Liberal Arts & Sciences and associate dean for the graduate school before returning to teaching in 2012 as the John E. and Winifred Sharp Teaching Professor in the School of Engineering. He has been elected a fellow of the Royal Aeronautical Society and the American Society of Mechanical Engineers, as well as an associate fellow of the AIAA. He also served as president of Sigma Gamma Tau, an honor society for aerospace engineering.

He was also recognized repeatedly for his work in the classroom. He was a recipient of the Annual Celebration of Teaching Award, voted upon by graduate student representatives, in 2007, as well as the Henry E. Gould Award for Distinguished Service to Undergraduate Engineering education in 1997.

“Students maintain a deep respect and affection for Saeed, and for good reason,” Hale wrote in the nomination letter. “His undergraduate and graduate students are well-placed in industry, academia and government service, and I have never met one of his former students who do not rave about the educational foundation they received from Dr. Farokhi.”

“He sets a very high bar for performance, he leads by example, and he offers availability above and beyond expectations to mentor students to reach their full potential,” Hale wrote.

Farokhi was grateful for the latest recognition.

“It means everything,” he said. “KU gave me an opportunity to pursue my passion in research, my passion in teaching. KU offered me fantastic students who were as eager — sometimes more eager — to learn as myself. And KU gave me the opportunity to work with some of the best talent, as far as colleagues are concerned.”

Farokhi has remained busy in retirement — continuing to work on research and filing new patents; updating his book, “Aircraft Propulsion,” which is used as a textbook in many aerospace engineering classes; and co-chairing the dissertations of two doctoral students. He is “keeping busy with my academic love of life.”

The Atwood Award, endowed by Rockwell Collins, consists of an honorarium and a certificate presented by the American Society for Engineering Education (ASEE) at their summer conference. He will also be recognized at an awards ceremony at the 2022 AIAA SciTech Forum, January 3-7, 2022, in San Diego.