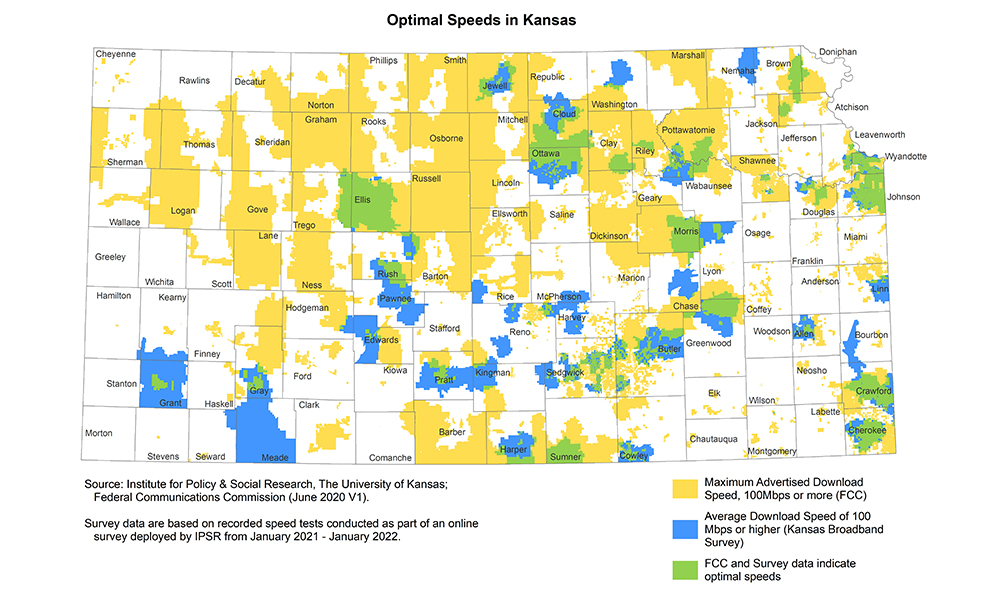 LAWRENCE — University of Kansas researchers found that up to 1 million Kansans live in regions that lack access to high-speed broadband services at adequate speeds. Close to half of those who responded to a survey on broadband reported dissatisfaction with broadband services. Average download speeds are substantially higher for Kansans living within city limits compared to speeds available for Kansans outside of city limits.

These findings contradict information published by the Federal Communications Commission about broadband availability in Kansas. The current FCC National Broadband Map reports maximum advertised speed, which is not always the same thing as the service available for purchase in a given location. The KU research team compared its findings of where Kansans have adequate broadband (defined as speeds of at least 100 mbps download and 20 mbps upload) to the FCC map. Only in 25% of Kansas locations did the maps agree. The KU team found that only 44% of Kansans live in areas with adequate broadband speeds.

“Kansans learned the hard way during the COVID-19 pandemic that broadband was necessary for work and education,” said Donna Ginther, Roy A. Roberts and Regents Distinguished Professor of Economics and director of the Institute for Policy & Social Research at KU. “At IPSR, we learned that there was very little reliable data on broadband access in the state, so we created our own survey with an embedded speed test. Our results show that the FCC map showing that 85% of Kansans have access to reliable broadband is highly inaccurate.”

The research team, led by Ginther and Germaine Halegoua, John D. Evans Development Professor & Associate Professor of Communication and Media at the University of Michigan, began working on this study in part because of the lack of accurate and complete information about broadband access in Kansas. The team also includes IPSR researchers Xan Wedel, Thomas Becker and Genna Hurd. This study is funded by a University Center CARES Act grant from the Economic Development Administration.

The lack of data on broadband access in Kansas — an issue that the COVID-19 pandemic brought to the forefront — prompted the research team to conduct a speed test and survey of user experiences with broadband across the state. The team interviewed constituents, residents and internet providers to develop a more complete picture of the issues surrounding broadband in the state.

The team found that, though broadband is essential for work, economic development and accessing public services, accurate data on broadband service in Kansas is limited and what data there is suggests a pressing need to invest in broadband infrastructure.

“Speed and access to internet connection at a particular address is important to measure, but so is how people experience that speed, quality of connection and cost of access in their everyday lives. That’s one of the reasons our survey results are informative. They pair reported internet connection (or lack thereof) with information about what it means to have that sort of connection — the challenges, constraints and uneven availability experienced across the state as well as the gratitude some rural communities felt toward the independent ISPs who made the effort to serve their regions,” Halegoua said.

Focus group and interview respondents recognized a variety of disadvantages due to lack of broadband availability. They experienced slow speeds, data caps, unreliable internet access and a lack of options for service provision. Lack of robust and reliable broadband service in rural and frontier communities creates significant challenges for people to do their jobs, keep up with technological advancements in a variety of industries and create jobs for the future.

The full report of the KU broadband study will be available later in January 2023. An executive summary of the report is available now on the IPSR website along with preliminary results. Until Jan. 13, members of the public have an opportunity to challenge the broadband map FCC published showing internet coverage. The information reflected on that map will help determine levels of federal funding available to support broadband development. More information about submitting public comments on the FCC National Broadband Map is available on the Kansas Department of Commerce website.

Image: This map compares the FCC reports of broadband availability in Kansas to the speed test data from a University of Kansas survey. The KU researchers found only 43.5% of Kansans live in areas with broadband speeds of 100 mbps or more.