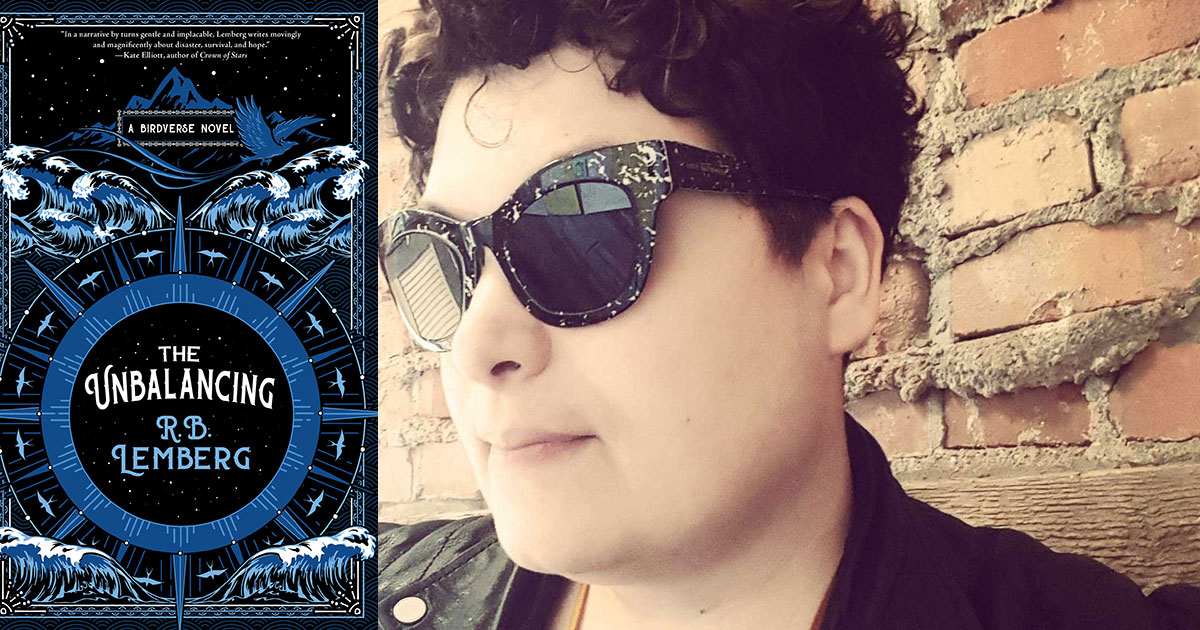 LAWRENCE — The power of a name is an important concept to R.B. (Renee) Perelmutter, as the associate professor is known to students and fellow faculty in the University of Kansas Jewish Studies Program and Department of Slavic, German & Eurasian Studies.

“Names in general are of perpetual interest to me,” Perelmutter said. “It's a research interest, a creative interest and a personal interest. I, myself, have changed names a number of times.”

Thus, names are important, too, to the writer/poet R.B. Lemberg, Perelmutter’s author name, in their first novel set in the fantasy realm known as the Birdverse. The new book from Tachyon Publications, “The Unbalancing,” follows Lemberg’s acclaimed 2020 novella, “The Four Profound Weaves,” which was shortlisted for that year’s Nebula, Locus, World Fantasy and Ignyte awards.

Lemberg will read from the new book as part of a launch party at 7 p.m. Tuesday, Sept. 20, at The Raven Book Store.

One of the two protagonists of “The Unbalancing,” the nonbinary poet Erígra Lilún, calls upon the magic of their “deepname” in an attempt to stave off a looming ecological disaster. Lemberg explained the concept, which is central to the action in the Birdverse.

“I envision deepnames as a kind of a neurolinguistic feature, a type of neurodivergence that can be invoked at will,” the author said. “If you put somebody who has this magic into an fMRI machine … the places where the deepnames reside in the mind would light up. It is obviously a fantasy premise. But that's what started this whole thing.”

More importantly, the author said, as canonized in the Birdverse works:

“Deepnames can be triggered by invocation — either spoken out loud or whispered or even spoken inside the mind. Then you can do magic with it. You have the magical ability to see it. It's like a star or constellation that floats around your head, and we can use these geometrical structures to affect the world.”

“It’s a neat magic system that is based on language, because in order to acquire deepnames, but also in order to know what to do with the deepnames, you need to understand how language is produced. It really has to do with breath; how you train your breath to produce particular sounds. … I love when readers geek out over this magical system and ask me details. It's awesome.”

Even more thrilling, the author said, are notes from readers saying how much the Birdverse stories, poems and books, with what one critic in Library Journal called their “deeply queer” viewpoint, mean to them.

“I just want to feel that my community finds my work meaningful,” Lemberg said. “And I've been rewarded in my career by hearing back from people who read my work when they're feeling down, or who have special place on their shelves for my books because they affirm their lives. People came out and figured out who they are because of my work. There's no higher honor for me as a writer than this.”

Without giving away any plot spoilers, the author said “The Unbalancing” is “my queer Atlantis.”

“I wrote it in 2020, during the pandemic, when I think many of us were grappling with these questions of where we're going and what is going to happen. I think many of us are still grappling with these questions. I wrote this book after a very dear friend of mine passed away suddenly at a young age. It still is very heavy for me, and so I wanted to write something that would be both sad and uplifting at the same time. I didn't want it to be a disaster book. I wanted it to be full of queer joy and hope. I hope that both those emotions are there.”

Image: Renee Perelmutter, associate professor at the University of Kansas, as author R.B. Lemberg, together with their first novel, "The Unbalancing" (Tachyon Publications, 2022).