LAWRENCE — When Gregs Thomopulos came to the University of Kansas from Nigeria in 1962, his biggest worry was not wasting the opportunity.

“Coming from abroad, I was very focused on having gotten to this university. I didn’t want to blow it,” he said. 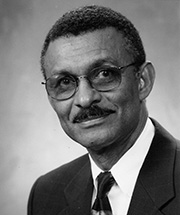 He easily exceeded that hope. Thomopulos graduated from the School of Engineering with a degree in civil engineering in three years, then went onto a distinguished career that saw him become the CEO and chairman of the Stanley Consultants, a major international engineering, environmental and construction services firm headquartered in Iowa.

For all his accomplishments as an immigrant to the United States, Thomopulos was honored in spring 2022 with the Medal of Honor from the Ellis Island Honors Society. The organization honors the contributions made by immigrants and their descendants throughout American history. This year’s honorees also included former Homeland Security Secretary Jeh Johnson, FEMA administrator Deanne Criswell and numerous others. Previous winners include leaders in politics, business and other fields.

“Obviously, I was very surprised,” Thomopulos said. “I feel so humbled, because I don’t consider myself in the assembly of some of the recipients in the past.”

In the early 1960s, a number of African nations had recently won their independence from colonial European powers. The U.S. Department of State established a scholarship program, the African Scholarship Program of American Universities (ASPAU), in collaboration with U.S. universities and African governments, to bring promising students from Nigeria and other African countries to receive a free education.

The program was “what every student in Nigeria aspired to,” Thomopulos said. “Growing up abroad — I’m talking about the ’60s and ’70s — the educational system beyond secondary school was not as good as those overseas.”

So, many students sought to study abroad, he said. “Unless you came from very wealthy parents, you couldn’t afford to go.”

He applied for the ASPAU scholarship, took a required exam, then joined finalists who traveled to the city of Lagos to be interviewed by U.S. officials.

“I was lucky to be one of 96 recipients from Nigeria in 1962,” he said, “and actually one of six students from my high school.”

But there was one catch. “You don’t get to choose which university you apply to,” Thomopulos said. “I did not choose KU. We didn’t have the option of choosing which universities.”

Still, he said, “I was happy to be admitted to KU. That was a pretty big highlight in my life.”

Lawrence in the early 1960s was a new experience for the young civil engineering student from Africa.

“It was cold in the Midwest,” he said, and there were few other Africans on campus. Still, Thomopulos’ time at the university was enhanced by the fact that some faculty members from KU Engineering — including John McNown, who served as the school dean when Thomopulos arrived on campus — had been to Nigeria. Thomopulos blazed through the program, finishing his undergraduate degree in three years with offers to continue his studies from several prominent graduate schools, including a fellowship from the University of Illinois and a teaching assistantship from the University of California-Berkeley. He went to UC-Berkeley, where he earned a master’s degree in structural engineering and structural mechanics.

“The education I got in the School of Engineering was excellent,” Thomopulos said. “It was very contributory to my success.”

Prior to graduate school, Thomopulos went to work for Stanley Consultants as a summer intern in Muscatine, Iowa. He returned to the company for a permanent position after graduate school and worked for 18 months before being transferred to the Nigeria office, then to Liberia as the company’s regional manager for West Africa. Eventually, he was transferred back to the company’s headquarters in Iowa and elevated to lead its international division before becoming CEO in 1987. He held that job for 20 years, then was chairman of the board for 10 more years. He is now chairman emeritus of Stanley Consultants.

Thomopulos earned several honors along the way, including the Distinguished Engineering Service Award from KU in 2002, the OPAL Award for Management from the American Society of Civil Engineers in 2010, and he was inducted into the National Academy of Construction in 2017 for his distinguished contributions to the industry. He was elected president of the International Federation of Consulting Engineers in 2010 and chairman of the American Council of Engineering Companies in 2013.

The honors continue to come his way. The Ellis Island award was conferred in recognition of Thomopulos’ support for higher education and individuals with disabilities, as well as his work to advance sustainable infrastructure.

KU helped make all of that possible, Thomopulos said. When his daughters were deciding where to go to college, he gave them a piece of advice: “You don’t have to go to an Ivy League school. A good public university will give you good education and grounding.”

“Most people would say if you put your mind to it, if you have a goal for what you want to be and work toward it, you will eventually succeed,” he said. “My experience at KU was excellent.”