LAWRENCE — The University of Kansas Department of French, Francophone & Italian Studies will host the French Ambassador to the United States to celebrate the department’s designation as a Center of Excellence through the French Embassy. 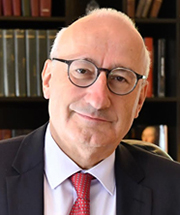 Ambassador Philippe Etienne will be in Lawrence Sept. 12 for a morning event with faculty and students from the department. The ambassador will be accompanied by the French Consul General in Chicago, Yannick Tagand.

“We are delighted to host the French Ambassador to the United States, His Excellency Philippe Etienne, as well as Consul General Tagand,” said Bruce Hayes, chair of the department and professor of French. “We are deeply honored by their visit, and we are pleased that the French Embassy has designated the Department of French, Francophone & Italian Studies a Center of Excellence. This designation will provide wonderful opportunities for our students and faculty and is an important recognition of the work being done by our faculty, students and staff.

"With the establishment of this new partnership, I look forward to further strengthening the bonds between KU and the French Embassy.”

The department was officially designated a Center of Excellence in August 2022, becoming just the 25th department in the nation to earn the prestigious recognition. Other designated universities include Brown, Princeton, Harvard and Yale, as well as state schools such as the University of California-Los Angeles, the Ohio State University and the University of Wisconsin.

The Centers of Excellence were established by the French government to promote French culture in American universities and increase ties between scholars, artists and public intellectuals in France and the U.S.

“The international profile and strength of our students and faculty is the main reason we were able to earn the designation as French Center of Excellence,” said Van Kelly, professor of French and director of graduate studies, who will serve as the center’s director. “The French Center crosses academic disciplines and fields, and KU is rich in students and faculty who engage in outreach with French and Francophone cultures.”