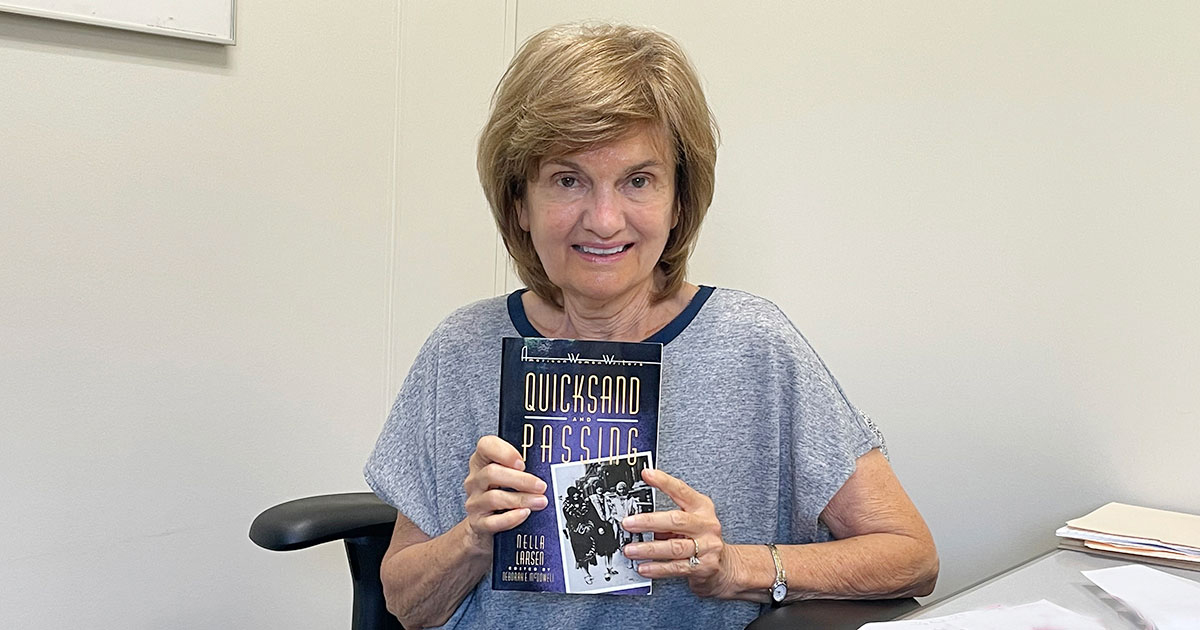 LAWRENCE – While many literary critics have found Nella Larsen’s 1929 novella “Passing” to be frustratingly opaque, and others have concentrated on its themes of same-sex attraction and class consciousness, an essay by a University of Kansas professor of English finds that racial repression is the focus of the novel by analyzing it from a Freudian perspective.

Doreen Fowler said she believed that the shift to a psychological reading explains why the two main characters — Irene, who lives as a Black woman, and Clare, who passes for white — are doubled.

In an article titled “Racial Repression and Doubling in Nella Larsen’s Passing” in the latest edition of The South Atlantic Review, Fowler wrote that the main character, Irene Redfield, “works to erase signs of her black identity — but those signs of blackness return to haunt her in the form of her double, Clare. While many scholars have recognized that Irene is ambivalent about her African American iden­tity and that Clare and Irene are doubled, my original contribution is to link the two. In my reading, Clare is Irene’s uncanny double because she figures the return of Irene’s rejected desire to fully integrate with the black race.”

Fowler said Larsen, who worked as a nurse and was acquainted with then-popular Freudian theories, structured the novella from Irene’s point of view, and that what other critics call confusing passages filled with ellipses are meant to show the reader the main character’s distorted thinking.

“That's why there is so much opaqueness and unknown in this novel,” Fowler said, “because whatever Irene refuses to know is withheld from the reader.”

The KU researcher said, “I think the whole novel is characterized by repression, and particularly racial oppression is repressed. According to Freud, when you repress something, it returns in a disguised form, often the double.

“Clare is the one who is passing,” Fowler said, “and you would expect that Clare is an example of repression. But I argue that she is the return of the repressed because she really wants to be with Black people. She wants full solidarity with Black people.”

Fowler, who often approaches literature through a psychological lens, said that while the book is over 90 years old, it’s not surprising that Netflix chose to release a filmed version of “Passing” less than a year ago.

“I think ‘Passing’ is relevant today,” Fowler said, “because there is racism in our culture, and racism is a repression — a refusal to recognize that Black people are people just like white people. I think Larsen teaches this in her novel. In the novel, not only white people repress Black people, but what Larsen calls Negro society, upper-class Blacks, repress full solidarity with an oppressed, racialized people. They don't want to be marginalized. So there is a scene in the novel when Irene’s Black husband is talking to his sons about a lynching, and Irene stops him because she doesn't want to know that there is racial oppression in the United States.”

Without giving away any spoilers, Fowler believes the novella’s ambiguous conclusion – often decried by critics who feel denied of closure — is simply another indication of Irene’s psychological repression.