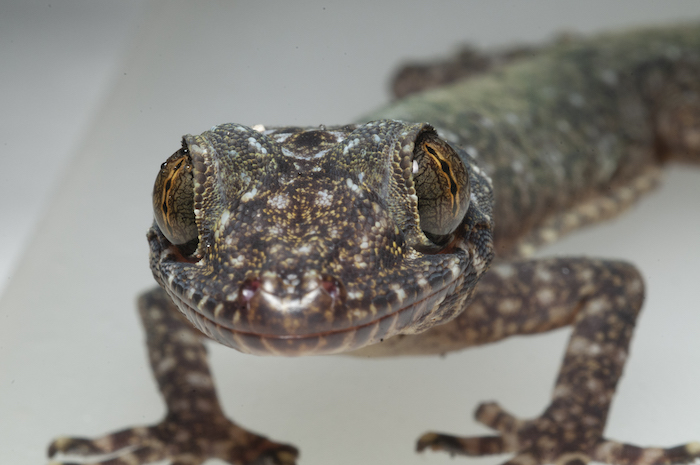 LAWRENCE — Does the Philippines’ astonishing biodiversity result in part from rising and falling seas during the ice ages?

Scientists have long thought the unique geography of the Philippines — coupled with seesawing ocean levels — could have created a “species pump” that triggered massive diversification by isolating, then reconnecting, groups of species again and again on islands. They call the idea the “Pleistocene aggregate island complex (PAIC) model” of diversification.

But hard evidence, connecting bursts of speciation to the precise times that global sea levels rose and fell, has been scant until now.

A groundbreaking Bayesian method and new statistical analyses of genomic data from geckos in the Philippines shows that during the ice ages, the timing of gecko diversification gives strong statistical support for the first time to the PAIC model, or “species pump.” The investigation, with roots at the University of Kansas, was just published in the Proceedings of the National Academy of Sciences.

“The Philippines is an isolated archipelago, currently including more than 7,100 islands, but this number was dramatically reduced, possibly to as few as six or seven giant islands, during the Pleistocene,” said co-author Rafe Brown, curator-in-charge of the herpetology division of the Biodiversity Institute and Natural History Museum at KU. “The aggregate landmasses were composed of many of today’s smaller islands, which became connected together by dry land as sea levels fell, and all that water was tied up in glaciers. It’s been hypothesized that this kind of fragmentation and fusion of land, which happened as sea levels repeatedly fluctuated over the last 4 million years, sets the stage for a special evolutionary process, which may have triggered simultaneous clusters or bursts of speciation in unrelated organisms present at the time. In this case, we tested this prediction in two different genera of lizards, each with species found only in the Philippines.”

For decades, the Philippines has been a hotbed of fieldwork by biologists with KU’s Biodiversity Institute, where the authors analyzed genetic samples of Philippine geckos as well as other animals. However, even with today’s technology and scientists’ ability to characterize variation from across the genome, the development of powerful statistical approaches capable of handling genome-scale data is still catching up — particularly in challenging cases, like the task of estimating past times that species formed, using genetic data collected from populations surviving today.

Lead author Jamie Oaks of Auburn University and co-author Cameron Siler of the University of Oklahoma were both KU graduate students advised by Brown. They were joined by co-author Perry Wood Jr., now at the University of Michigan, who recently worked at Auburn with Oaks and, earlier at KU with Brown, as a postdoctoral researcher.

For two centuries, naturalists who studied species distributions in the Philippines have discussed, debated and written extensively about the ideas behind modern species pump theory or, in the Philippines, predictions now making up the “PAIC Paradigm.” Historically, researchers focusing on particular animals or plants have endorsed the general idea, but others expressed skepticism because it didn’t seem to hold up in other species they studied.

“Over the last quarter century, with widespread availability of genetic data, the model’s specific predictions have been tested much more rigorously, objectively and quantitatively — with real data from natural populations — which was a major step forward in Philippine biogeography,” Brown said. “In some animals and plants, predictions held up. But in others, when the same predictions were tested with real data and appropriately rigorous statistical methods, they were rejected over and over. In many of our own studies at KU, when we examined corollaries of the PAIC model in individual genera, or groups of closely related species, we were surprised to find the ice ages time window wasn’t even related to much of the species diversity we find today. In study after study, individually focusing on a genus of bats, or a group of frogs, we found that fewer and fewer of today’s species seemed to have diverged in the Pleistocene. At that point, with a lack of evidence piling up, we kind of rephrased the question. We went back to the data from all those earlier studies and asked — across all these different groups of animals, can we find any statistical support for species formation, clustered in the Pleistocene time window? And the answer kept coming back ‘no’ — until now.”

Brown said the key to understanding the genomic evidence came from Oaks, who started looking at gecko groups with a new approach to conceiving phylogenetic trees. Instead of one species branching from another in isolation — as phylogenetic trees are traditionally drawn — a plethora of new species might branch away at roughly the same time in something that looks more like a “shrub” than a tree.

“Shared ancestry underlies everything in biology, whether it's a gene sequence, viral strain or species,” Oaks said. “Each branching point on a phylogenetic tree represents biological diversification — for example, one species diverging into two. We have long assumed the processes responsible for these divergence events affect each species on the tree of life in isolation. However, we have long appreciated that this assumption is likely often violated. For example, changes to the environment will affect whole communities of species, not just one. Our approach allows multiple species to diversify due to a shared process. By doing so, we are now better equipped to ask questions about such processes and test for the patterns they predict.”

By relaxing the assumption of independent divergences, the genomic data from Philippine geckos supported patterns of shared divergences, as “predicted by repeated fragmentation of the archipelago by interglacial rises in sea level,” according to the researchers.

“This type of pattern of shared divergences can now be tested with our new phylogenetic approach,” Oaks said. “Gekko and Cyrtodactylus are two genera of geckos that are good test cases to look for these patterns, because they have been widespread across the Philippines since long before glacial cycles started, and so we know they were present on the large ice age islands, when they were fragmented by rising sea levels. We used information from their genomes to reconstruct their phylogenetic trees and test for patterns of shared divergences predicted by the island-fragmentation hypothesis. We did find support for such patterns, and now we see evidence for the effect of the glacial cycles, but it’s important to remember that the overall phylogenetic history of these lizards is consistent with a more complex story.”

With this part of the “species pump” hypothesis now supported in the Philippines, Brown said there are many other cases where biogeographers could use the same approach to detect geographic or environmental changes that touched off similar explosions of biodiversity.

“The idea that some barrier could affect unrelated groups like birds, frogs, lizards and insects — possibly impacting whole faunas together at the same time — has been something evolutionary biologists have been grasping at for a long time. But strong support for simultaneous timing of these processes has been kind of elusive,” Brown said. “There are lots of theories about shared mechanisms, and the ‘species pump’ idea is just one of them. But, in general, common mechanisms of diversification, or shared processes of speciation, have always been big, tantalizing topics for evolutionary biologists, especially for biogeographers.”

The PNAS research in the form of a preprint also is available at the open access science repository bioRxiv. Oaks showcased the new approach in 2021 at the annual meetings of the Society for the Study of Evolution’s and, next month, Brown will share it with the scientific community in the Philippines while attending the 4th Southeast Asian Gateway to Evolution (SAGE) meetings, in Manila.

Photo: What looks like a "relaxed" attitude on the face of this Philippine gecko may actually be a new way to see evolutionary trees. Credit: Rafe Brown and Jason Fernandez.