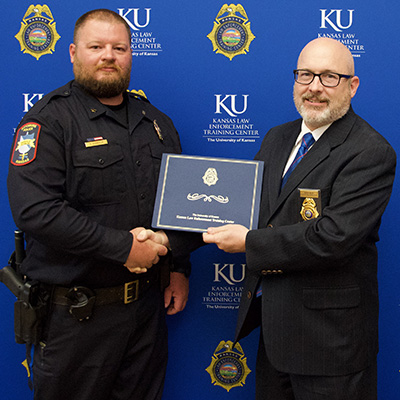 Officer Dustin Hiebsch of the Pittsburg Police Department was the graduating class president. The speaker for the ceremony was Capt. Guy Schroeder of the Wichita University Police Department. Troy Livingston, KLETC senior instructor of police, was the class coordinator for the 294th Basic Training Class.

Deputy Christine Settanni of the Wabaunsee County Sheriff's Office and Officer Katelyn Morris of the St. George Police Department achieved the Director’s Honor Role by achieving a total average on the written examinations of 94% or higher. Settanni had the highest overall academic score with 94.52% and was awarded the Larry Welch Award of Academic Excellence.

Officer Braden Taylor of the Wichita University Police Department was recognized during the ceremony for his firearms proficiency as the class “Top Shot.”

About 300 officers enroll annually in KLETC 14-week basic training programs. KLETC offers continuing education and specialized training to over 10,000 Kansas officers each year. KLETC is located one mile west and one mile south of Yoder, near Hutchinson, and is a division of KU Lifelong & Professional Education.

The graduates, who began their training in March 2022, represented multiple municipal, county and state law enforcement agencies from across Kansas. Graduates are listed below by county and agency: