LAWRENCE — Kevin Smith, dean of KU Libraries since 2016, has been named the next director of Libraries at Colby College in Waterville, Maine. He will begin his new appointment Aug. 1. 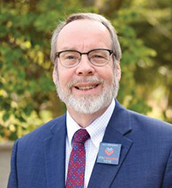 Smith said the move will allow him to be closer to family in the Northeast. KU leadership expressed gratitude for his contributions to the Jayhawk community.

“While I am happy he will be able to spend more time connecting with those he holds dear, I know he will be missed here at KU,” said Barbara Bichelmeyer, provost & executive vice chancellor. “I want to thank him for his leadership of the libraries during a challenging fiscal period for KU, made even more tenuous by skyrocketing prices of journal subscriptions. I appreciate his international expertise on open source educational materials and its beneficial impact on the KU community. I believe it is important to recognize and to thank him for his leadership in the areas of diversity and inclusion, including serving as an objective leader in this area of our strategic plan, Jayhawks Rising.”

Smith arrived at KU in May 2016 after 10 years as director of Copyright and Scholarly Communications at the Duke University Libraries. In 2021, he was appointed director of the University Press of Kansas, a consortium governed by all six Kansas Board of Regents universities and based at the KU Lawrence campus.

As both a librarian and a lawyer Smith has focused on intellectual property issues. His role at Duke was to advise faculty, staff and students about the impact of copyright, licensing and the changing nature of scholarly publishing on higher education. Prior to that, Smith was director of the Pilgrim Library at Defiance College in Ohio, where he also taught constitutional law. His teaching experience is various, having taught courses in theology, law and library science. Smith is the author of numerous articles on the impact of copyright law and the internet on scholarly research as well as libraries' role in the academy. He has been a highly regarded blogger on these issues for many years, and in 2013 he published Owning and Using Scholarship: An IP Handbook for Teachers and Researchers with the Association of College & Research Libraries.