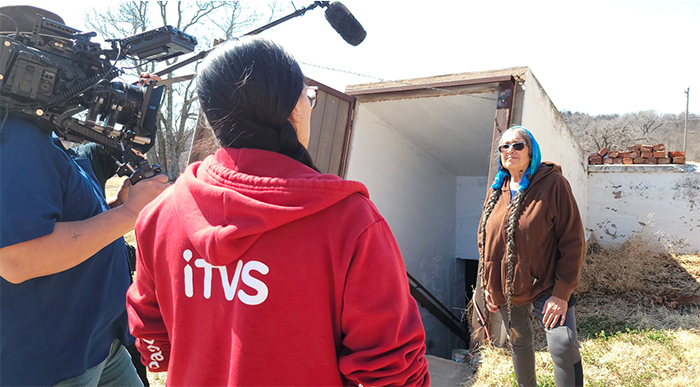 LAWRENCE — Nebraska may be known as the Cornhusker State, but a University of Kansas professor is in the midst of a new documentary project telling the story of “the first Cornhuskers,” who have revived nearly 20 Indigenous species of corn as part of the Pawnee Corn Seed Preservation Project.

Rebekka Schlichting was a recipient of a $37,500 grant from Firelight Media, PBS and the Center for Asian American Media to produce a documentary on the project, part of a larger initiative called HOMEGROWN: Future Visions, to support emerging filmmakers who identify as Black, Indigenous and/or people of color to tell stories of the American Midwest. Schlichting’s film, tentatively titled “Back to the Land: The Pawnee Corn Seed Preservation Project,” will focus on Pawnee citizens working in Nebraska to build a seed library.

Schlichting, assistant professor of the practice in the William Allen White School of Journalism & Mass Communications, first learned of the project while working with Vision Maker Media, a company that trains and funds Indigenous filmmakers and documentarians. While working on a documentary about land being returned to original tribal owners, she learned of the corn seed project and wanted to tell its story.

“They’ve been able to bring back about 20 different varieties of Pawnee corn,” Schlichting said of the project. “Nationwide, tribes have identified about 700 different varieties of corn that differ not only in appearance but in nutritional value from the dominant corn today. We decided that the Pawnee Corn Seed Project was too big to include in the returning the land story and needed a story of its own.”

Schlichting and her crew have shot the majority of their footage of Pawnee families working with Nebraska farmers to plant corn, building a seed library and discussing the importance of the project. Over the summer they will finish writing and editing the film, which, like the other films in the HOMEGROWN: Future Visions series, will run 8-10 minutes. Through the project, Schlichting has partnered with Nebraska Public Media’s Nebraska Stories series, which will air the film on its member stations this fall.

A member of the Ioway Tribe of Kansas and Nebraska, Schlichting said the story of reclaiming food sovereignty and returning to healthy, traditional lifeways of the Pawnee people spoke to her.

“Corn is important in my life, particularly, which is part of why I was interested in this story. My family was able to harvest our own Indian corn on the Kickapoo reservation,” Schlichting said. “The tradition of harvesting our own corn is an important part of our culture. With each seed, we pray and think about every life that will be touched by it. With each piece harvested we are reminded how sacred it is, and we give thanks for it.”

The film will feature Pawnee leaders and citizens, who are now based in Oklahoma but are able to work through partnerships with settlers in their traditional lands in Nebraska. The Pawnee, who have called themselves the first Cornhuskers, discuss what the reclamation means to the tribe, how colonization threatened Indigenous foods like corn, how they are building their seed library, how they are revitalizing corn varieties and how the native varieties can help combat health problems like diabetes, which are prevalent in Indigenous communities.

Schlichting, who teaches documentary filmmaking classes at KU, said she hopes to hold public screenings of the film and enter it in the festival circuit as well after initial airings this fall.

“It is possible to bring back native food sources. It’s a lot of work, but it has totally changed people’s lives,” she said. “We don’t often see stories about Native people in popular media today, or if we do, they’re stories from the past. I’m proud to be able to share this story.”