LAWRENCE — Steven Warren has worked on more than his fair share of studies and clinical trials in four decades as an expert in social and behavioral sciences. The University of Kansas community has the chance to hear the professor deliver his Inaugural Lecture at 5:30 p.m. May 4 in the Hancock Ballroom at the Oread Hotel. A reception will immediately follow the presentation at 6:30 p.m. 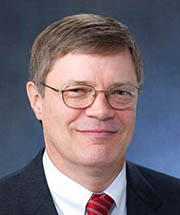 Warren is a University Distinguished Professor of Speech-Language-Hearing and an investigator in the Schiefelbusch Institute of Life Span Studies at KU. His presentation is titled “Fragile X and the Role of Maternal Responsivity.”

“Fragile X is a genetic condition inherited from mothers that results in various developmental problems such as intellectual disabilities,” Warren said. “It is caused by a single gene found on the X chromosome. This gene is responsible for encoding a single protein that is required for the optimal development of the brain. Our longitudinal study has focused on the impact of mothers on the children starting in early childhood and stretching into adolescence. Our work suggests that maternal responsivity may have a substantial impact on the development of these children.”

Throughout his career, Warren has focused on communication and language development in children with developmental delays and disabilities.

A 22-year faculty member at KU, Warren currently serves as a principal investigator in collaboration with Nancy Brady, the chair of KU’s Department of Speech-Language-Hearing: Sciences & Disorders, on an ongoing longitudinal study on the impact of parenting on the development of children with fragile X syndrome, which is the most common inherited cause of autism.

This work began when Warren served as an investigator at the John F. Kennedy Center for Research on Human Development as a faculty member at Vanderbilt University from 1982 to 1999 and then continued once he came to KU in 2000. In 2004, he began working with an interdisciplinary group of scientists on the development of LENA, a breakthrough technology that automatically captures and analyzes huge amounts of child language interaction data. This work is still ongoing.

Warren’s research has been recognized by career research awards from the National Down Syndrome Congress (1999), the American Association on Intellectual and Developmental Disabilities (2008) and the American Psychological Association (2013).

Warren holds a doctorate in child and developmental psychology from KU. He has been in a variety of roles since returning to KU as a faculty member in 2000, including vice chancellor for research and graduate studies from 2007 until 2014, when he stepped down from the role to focus on teaching and research.