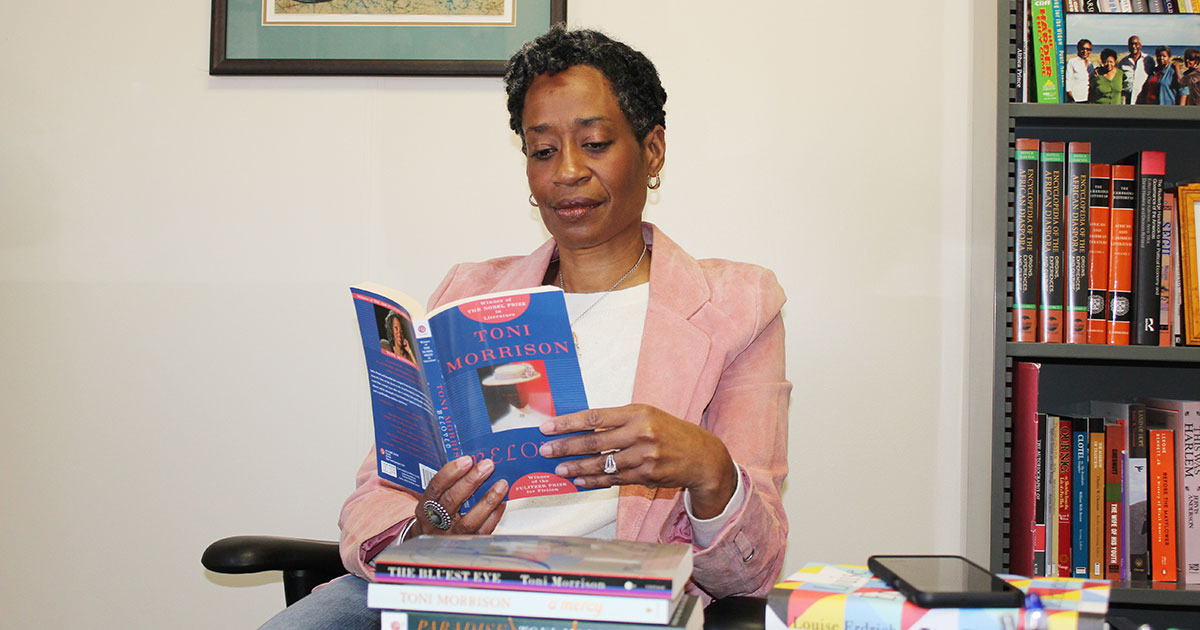 LAWRENCE – While some people have lately sought to remove Toni Morrison’s 1970 novel “The Bluest Eye” from high school curricula, a University of Kansas researcher argues that part of its value is the way it informs modern readers about longstanding gendered and racial health disparities laid bare by the COVID-19 pandemic.

In an article titled “Getting to the Root of US Healthcare Injustices through Morrison’s Root Workers,” published Jan. 20 in the journal Multi-Ethnic Literature of the United States, Giselle Anatol explores the depictions of African American folk healers who appear in several Morrison novels, including “Bluest Eye,” “Sula” and “Song of Solomon.” The professor of English analyzes the clues Morrison gives as to why these women – who use natural, herbal remedies — are sought out in lieu of formally trained doctors. Those reasons include but are not limited to the inability to afford treatment within the medical establishment, a lack of physical proximity to treatment centers and a desire to avoid racial and gender discrimination in a system dominated by white caregivers and men actors, which still pertain to the experiences of many African Americans today.

Anatol said episodes of sexual abuse, murder and other cruelties in Morrison’s fiction – which many objectors cite — are indeed disturbing but typically complicated by the perpetrator’s own traumatic backstory.

“What Morrison does beautifully in her writing is to break down notions of strict binaries like good and evil, or the idea of folk healing as backward when compared to the progress associated with institutionalized medicine. Her work allows us to talk about the different strategies that people can employ for wellness ... to take care of their physical health, their mental and psychological health — even their financial health — when they don't have access to the same systems and forms of health care that other people do.”

Morrison wrote that a scene in “The Bluest Eye” can help explain many African Americans’ reluctance to receive a COVID-19 vaccination.

“It's not just that we have these Black characters who are uneducated or living in poverty and can't afford to access medical care,” Anatol said, “or are mistrustful because they're wary of a history of Black exploitation by the medical establishment and scientific communities. A lot of conversations about that have come up in news stories; African Americans not trusting medical interventions because of past cases like the Tuskegee syphilis experiments or what used to be called Mississippi appendectomies — the sterilization of Black women without their consent.

“In ‘The Bluest Eye’ we have Pauline, an African American woman who didn’t go to the doctor for the delivery of her first child, but she decides that she is going to go to the hospital for her second child’s birth, and she's treated as less than the white women – less than human in a variety of ways.  ... Morrison is addressing stereotypes of Black people that are rooted in slavery — that people of African descent are closer to animals than human beings; that Black women are suited for field labor and can endure more pain and lack the feminine fragility of white women or their emotional sensitivity.

“But what is key in this scene is that the history of racism has a present-day effect. It results in the absence of equitable care for Pauline, even though she has access to a hospital, to a licensed practitioner, to an integrated maternity ward. An experience like that would make one hesitant to put oneself in a position to go through that humiliation again.”

“The pandemic has revealed that cases like these have been going on for many years and are still prevalent,” Anatol said. “Numerous research studies have shown that physicians are less likely to prescribe pain meds to Black patients — and then prescribe them in lower doses — than to white patients. And even in the 2020s, Black women are three to five times more likely to die in childbirth than white women — even Black women who are college-educated. Reading Morrison can give people a better sense of the nuances of these situations — the multiple layers. There is not just one way that these disparities manifest themselves in our society. They might decrease over a period of time and then rise back up again.”