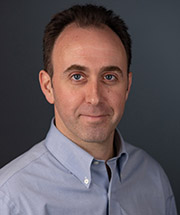 Beginning in September, Walters will join the lab of Petr Nguyen, faculty of science and chair of the Department of Molecular Biology and Genetics at the University of South Bohemia in the city of České Budějovice. Walters will work with Nguyen to investigate the evolution of sex chromosomes in Danaine butterflies, a subfamily of butterflies that includes the monarch butterfly.

Fulbright Scholar Awards are prestigious and competitive fellowships that provide unique opportunities for scholars to teach and conduct research abroad. The Fulbright U.S. Scholar Program offers over 400 awards in more than 130 countries.

The award will allow Walters to combine his experience in genomics with Nguyen’s expertise in cytogenetics to address a longstanding knowledge gap in the relationship between DNA sequence composition and higher order chromosomal structure in the evolution of sex chromosomes. Investigating the female-specific ZW sex chromosomes of butterflies provides an important counterpoint to the existing precedent of studies focused on male-specific XY sex chromosomes.

“This Fulbright award creates several excellent opportunities for me that I would not otherwise have,” Walters said.

Walters will be able to deepen his collaboration with Nguyen, who was a Fulbright scholar in Walter’s lab at KU in 2017. At that time, the two initiated the research program.

While working in Nguyen’s lab, Walters will obtain training in several cytogenetic methods that are not commonly performed at KU. Concurrently, Walters will be able to offer coaching in genomics and bioinformatics to Czech researchers.

“The award affords me the luxury of extending my sabbatical leave for the entire year, providing me with a wonderfully long stretch of time to focus on and advance my research activities,” Walters said.

The Fulbright Program is the flagship international educational exchange program sponsored by the U.S. government and is designed to build lasting connections between the people of the U.S. and the people of other countries. Since its establishment in 1946, the Fulbright Program has given more than 400,000 students, scholars, teachers, artists and scientists the opportunity to study, teach and conduct research, exchange ideas and contribute to finding solutions to shared international concerns.