LAWRENCE — Four midcareer faculty members at the University of Kansas will receive an award in recognition of their significant research or scholarly achievements in their field.

The University Scholarly Achievement Award recognizes truly outstanding scholarly or research contributions, with one award given each year in each of four categories: arts and humanities; medicine and clinical sciences; science, technology and mathematics; and social science and professional programs.

“These four scholars have all helped to elevate our university through their work, and I look forward to helping them celebrate their successes,” said Chancellor Douglas A. Girod. “Taken together, these faculty members and their inspiring achievements demonstrate the breadth and depth of the contributions to society that are possible through the work of one of America’s leading research universities.”

A panel chaired by Dave Tell, professor of communications studies, reviewed the nominations from colleagues at KU and across the nation.

These four winners — along with the winners of other annual research awards — will be honored at the University Research Awards ceremony from 7-9 p.m. April 5 at the Lied Center of Kansas. The event will be hosted by the chancellor, and all faculty and staff are invited to attend to help celebrate the university’s top researchers from both the Lawrence and KU Medical Center campuses.

Additional information about each of this year’s recipients and their work from the nomination materials is below.

Misty Schieberle made a once-in-a-lifetime discovery that has changed the landscape of late medieval literary studies. Schieberle effectively found a literary Holy Grail: a stunning discovery of a 15th-century manuscript by a prominent English author, royal secretary to Henry IV, Thomas Hoccleve. Schieberle’s discovery and article, “A New Hoccleve Literary Manuscript,” substantially reorients approaches to Hoccleve, his original English poetry, and to 15th-century language and literature. This discovery places Schieberle among the few elite researchers who have discovered a new manuscript written by a medieval author. The article in which she announced her discovery pushed a record number of downloads before it was printed. Her discovery has rocked the world of medieval studies in English, history and French as well as in book history/manuscript studies.

The body of Soumen Paul’s work has clinical implications for pregnancy-associated disorders, pregnancy loss and perinatal pathology. Paul is a leading researcher in the field of stem cells, vascular biology and hematopoiesis, which he has applied to the areas of pregnancy and early intrauterine development, with emphasis on the pioneering fields of embryonic stem cells and trophoblast stem cells. Paul’s laboratory first discovered the importance of a transcription factor, GATA3, in early stages of trophoblast development and embryo implantation. Subsequently, he also identified the importance of another GATA factor, GATA2, in this process. His discoveries have been used as a benchmark of early trophoblast development by scientists all over the world in the field of regenerative medicine. Thus, Paul’s research has contributed novel and fundamental discoveries that are highly cited by scientific peers worldwide. In addition to his strong funding track record and significant scientific contributions, Paul has invested immense time in the training and mentoring of KUMC graduate students, postdoctoral fellows and faculty.

Amy Burgin is an outstanding scholar who works at the interface of biogeochemistry, aquatic ecology, microbial ecology, ecosystem ecology and hydrology to address environmental problems. Her work looks at some of the fundamental issues facing the planet today: What is the role of climate change in degrading water quality? How do agricultural practices impact streams? How do non-perennial streams influence water chemistry? In addition to questions of global concern, she addresses important local issues such as the impact of a decommissioned fertilizer plant on Kansas River water quality. Burgin has secured more than $8 million in federal grants, published 50 peer-reviewed papers and is a leader in her field for performing cutting-edge research across a range of aquatic systems. In 2021, she and her students published "A practical guide for undergraduate research" that many, even outside her field, use to build inclusive research spaces. She also published a paper providing concrete suggestions for supporting academic mothers during COVID-19 and beyond. 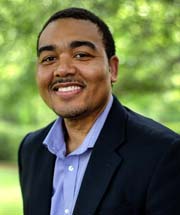 Brian Boyd is the director of Juniper Gardens Children’s Project in Kansas City, Kansas, a part of the KU Life Span Institute. His research focuses on the development and evaluation of evidence-based practices to improve outcomes for children with autism. His inquiry is at the forefront of community-engaged research and scholarship and building community partnerships to implement evidence-based practices in school and community contexts. His work also focuses on issues of implicit bias and race and how these issues affect the lives and outcomes of children of color, including children with disabilities. His work has shaped the direction of autism and disability research, reflected in over 80 peer-reviewed publications, over $20 million in current grant funding from multiple sources, and strong and sustained community impacts.