LAWRENCE — A University of Kansas School of Engineering assistant professor has received a federal grant to explore using “gamifying” techniques to boost the interest of undergraduate students to learn the design and application of electronic hardware. 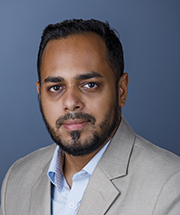 Tamzidul Hoque, assistant professor of electrical engineering & computer science, led the group that is splitting the $600,000 award from the National Science Foundation. A third of that money will go to KU; the rest will go to the University of Florida (UF), where Hoque’s collaborators Pasha Antonenko, Mary Jo Koroly and Swarup Bhunia are based.

The project could eventually have a direct impact on Americans’ pocketbooks, Hoque said. The supply chain crisis has driven inflation during the last year — with new car prices, in particular, skyrocketing because manufacturers have been unable to import enough computer chips that most modern vehicles rely on. Due to the increasing adoption of electronic devices, the global chip shortage could also affect other industries such as aerospace, defense, health care and information technology.

That’s led to a growing interest in rebuilding the United States’ chip-production capacity. Intel announced in January a plan to spend $20 billion on a new plant in Ohio, and the company could spend up to $100 billion over the next decade.

But there’s a catch.

Such infrastructure cannot be used without engineers, scientists and technicians with the ability to design, manufacture and use such sophisticated devices. However, misconceptions surrounding manufacturing jobs among college students, along with the growing popularity of computing jobs related to data analytics and artificial intelligence, motivate students with engineering majors to avoid hardware-related courses throughout their studies, according to Hoque.

Even though programming and coding have received great emphasis at the high school and undergraduate level, fundamental knowledge of electronic hardware, i.e., the innards of a computing system — from bits to circuits to systems — and basic operating principles have not received much attention. The basic hardware-oriented core courses often fail to stimulate interest even among the undergraduate students in computer engineering, computer science and electrical engineering, according to Hoque. Due to the lack of interest, these students largely ignore elective hardware-oriented courses later in their degree and do not consider the thriving semiconductor industry as their career choice.

“The problem we are trying to tackle here is that today in the semiconductor or hardware industry, we don't have enough workforce, and rapid enhancement to the chip-production capacity is not feasible without that,” Hoque said.

The goal of this project is twofold. One aim is to get more students interested in chip design and manufacturing. The other is to help prepare students in other engineering professions, such as mechanical and biomedical engineers, to use those chips in their systems.

“The students from various majors also need to know a lot about hardware so that they can develop new applications for health care systems, new automotive systems and so on,” Hoque said.

Gamifying the teaching process might jump-start the process by making electronic hardware a more appealing topic to early undergraduate students, motivating them to learn about advanced design and operational concepts by taking higher-level courses.

“That's why we are trying to develop this new course of the curriculum, which will teach fundamentals of hardware from a system perspective through a hands-on approach to students from any engineering major,” Hoque said. “And we will do that using as many interesting games that can be played on our hardware platform.”

Principal investigator Antonenko and Co-PI Koroly will research and evaluate the feasibility of the games at UF and leverage them for high school students and teachers during summer camps and professional development institutes organized by UF’s Center for Pre-collegiate Education and Training.

During the first two years of the project, high schoolers and their teachers will provide feedback on the design of engaging activities. The educational research will focus on the development of students’ situational interest in hardware engineering and strategies to sustain that interest.

Hoque will use the novel curriculum in a new summer class offered at KU as an elective undergraduate course for all engineering majors.

“It definitely helps that at the University of Kansas, we have the facilities to develop such a curriculum,” he said. “I’m very thankful to our department and our associate dean for academic affairs at the School of Engineering, Mario Medina, for their support.”