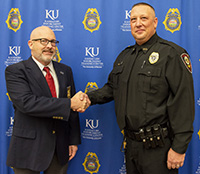 Officer Mike Adams of the Moundridge Police Department was the graduating class president. The speaker for the ceremony was Darren Chambers, sheriff of Sumner County. Steve McCorkill, KLETC senior instructor of police, was the class coordinator for the 286th Basic Training Class.

Richard Hedges of the Kansas Department of Wildlife and Parks was honored with KLETC’s Fitness Award. Hedges set a new running record at KLETC by running a mile and a half in 8 minutes, 16 seconds. Jesse Andrews of the El Dorado Police Department was recognized during the ceremony for his firearms proficiency as the class’s “Top Shot.”

Established by the Kansas Legislature in 1968, KLETC trains the majority of municipal, county, and state law enforcement officers in Kansas and oversees the training of the remaining officers at seven authorized and certified academy programs operated by local law enforcement agencies and the Kansas Highway Patrol.

The graduates, who began their training in August 2021, represented 15 municipal, county and state law enforcement agencies from across Kansas. Graduates are listed below by county and agency:

Established by the Kansas Legislature in 1968 as the central law enforcement training facility for our state, the Kansas Law Enforcement Training Center (KLETC) serves as the headquarters for all law enforcement training in Kansas. Located at the former naval air station south of Hutchinson and west of Yoder in Reno County, Kansas, the Center’s mission, as expressed in the Law Enforcement Training Act, K.S.A. 74-5601 et. seq. is “the promotion and development of improved law enforcement personnel and procedures throughout the state, and the training center shall offer to qualified applicants such programs and courses of instruction designed to fulfill this end.” KLETC, a unit of the University of Kansas Lifelong & Professional Education, directly trains the overwhelming majority of municipal, county and state law enforcement officers in Kansas, and oversees, supervises and monitors the training of the remaining officers at eight authorized and certified academy programs operated by local law enforcement agencies and the Kansas Highway Patrol.

Search options »
Subscribe to KU Today
KU in the news
PolitiFact — Thu, 05/19/2022
The US government is not creating food shortages, despite claim about buffalo killed in the 1800s
BBC — Wed, 05/18/2022
The endurance of Japan's simple street snack
To set the record straight on the destruction of bison in the 1800s, @MadisonCzopek looks to @KUHistoryDept profess… https://t.co/fB2c7zWh7U
«»
Follow us on Twitter »
Why KU
Apply »
One of 34 U.S. public institutions in the prestigious Association of American Universities
44 nationally ranked graduate programs.
—U.S. News & World Report
Top 50 nationwide for size of library collection.
—ALA
5th nationwide for service to veterans —"Best for Vets: Colleges," Military Times