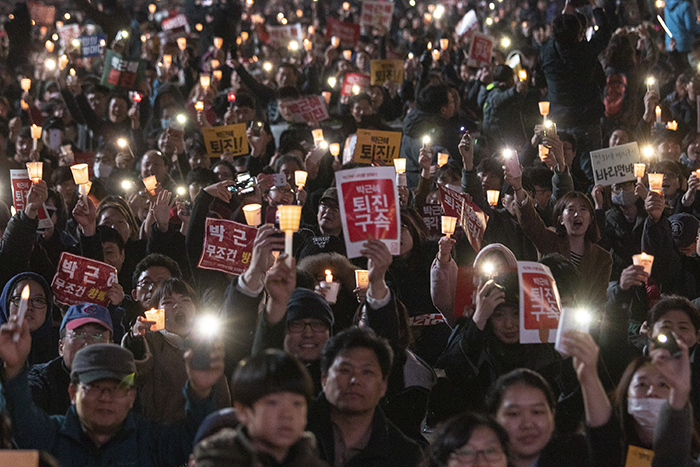 LAWRENCE — When South Korean President Park Geun-hye was impeached and removed from office in 2017, the movement that preceded it looked similar to other political maneuvers around the globe: Traditional media, social media, everyday citizens, politicians, activists and others all took part sharing information, misinformation and connecting digitally. But one thing was different: Activists and citizens pushing for impeachment succeeded. A University of Kansas scholar and former South Korean journalist has written a new book exploring how digital connectivity and collective action enabled the historic movement to succeed. 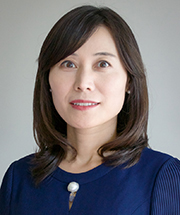 “Networked Collective Actions: The Making of an Impeachment,” Oxford University Press, tells the story of Park’s impeachment by examining intricate relationships both from the perspective of South Korean citizens, politicians, journalists, government officials and activists and analyzing technological and sociopolitical affordances around sustained citizen candlelight vigils calling for the impeachment. The book also offers a technical, empirical analysis of original data and a new scholarly theoretical framework related to digital media-facilitated collective actions of the connectivity that made it possible.

Hyunjin Seo, Oscar Stauffer Chair in Journalism and founding director of the KU Center for Digital Inclusion, observed two presidential impeachments in South Korea from different perspectives. When the nation's National Assembly voted to impeach President Roh Moo-hyun in 2004, Seo was a journalist covering public diplomacy and presidential affairs of the presidential Blue House in that country. By the second impeachment in 2016, she was a mass communications scholar at KU.

“That was such a big event to cover at that time,” Seo said of the South Korean National Assembly’s impeachment of Roh, which was ultimately overturned by the country’s Constitutional Court. “The presidential office is located very near to Seoul’s Gwanghwamun Square, the center of political and social movements, and also close to where I worked. Then, when I came to the U.S. and seeing another presidential impeachment in South Korea, but being removed was fascinating. I became interested in analyzing citizen mobilizations and roles of technology in all of this.”

Seo has always been interested in why some movements succeed and some others fail and how agents and structures interact during movements.

“Though this is a very complex question, we increasingly are beginning to see how network connectivity affords novel opportunities for collective action. I felt this is something I really wanted to study in-depth, and I didn’t want it to be just one journal article,” she said.

The result was “Networked Collected Actions,” in which Seo documents the Park impeachment amid presidential corruption scandals and the role of technology and actors therein. In the book, Seo, also a faculty associate at the Berkman Klein Center for Internet and Society at Harvard University, outlines the “agent-affordance framework of networked collective actions,” a scholarly framework that analyzes how agents, or those who took part in all different aspects of the impeachment, interacted with affordance — in this case, technology and information ecosystems and sociopolitical environments — to share views and information.

South Korea is one of the most highly connected countries in the world. Broadband access is higher there than in most other nations, and a majority of citizens are active on the internet and social media. When allegations of corruption were made against Park, large numbers of citizens began holding candlelight vigils in Seoul’s Gwanghwamun area. While the vigils have a long history in South Korea as a means of citizen protest, these vigils were different, thanks in large part to the changing information ecosystem there, Seo said. Right-wing and fringe media networks arose since the first impeachment. Bots were deployed to defend Park, generate misinformation and sow division, such as claiming North Korea was behind the impeachment movement. At the same time, social media and connectivity allowed citizens who supported impeachment to take part in the vigils and call attention to them, even if they could not be there physically.

“This impeachment, for someone who studies communications and connectivity, was especially important to help us better understand the rapidly evolving information ecosystem. You had so many agents, including right-wing propaganda social media bots, as well as traditional media and social media influencers all playing roles,” Seo said. “This book examines how interactions between these diverse agents produced shared content on all sides of the issue with the ultimate result of Park being removed from office.”

Based on interviews, secondary data analysis and content analysis of news reports and social media posts, the book details how both supporters and opponents of impeachment used network connectivity to make their cases. Park’s popularity plummeted, many of her defenders ultimately changed their minds, friendly media began criticizing her, and ultimately, she was convicted of corruption charges and removed from office.

One chapter analyzes the Sewol Ferry disaster, an incident that was instrumental in turning momentum against Park. In that case, nearly 300 teenagers on their school field trip drowned when a ferry sank. Park’s administration was accused of withholding information on the incident, mishandling its aftermath and failing to be transparent. That growing anger energized criticism against her and gave additional life to pro-impeachment supporters when a series of media reports revealed corruption. Interviews reveal how it engaged presidential critics and how the government tried, ultimately unsuccessfully, to control information about the disaster and impeachment, as well as how former presidential supporters came to express embarrassment about their past support.

While Park was eventually removed from office, “Networked Collective Actions” explores issues that remained and how agent-affordance interactions have evolved, as well as the importance of understanding information ecosystems in political, social and other movements. People are often reluctant to change their minds on an issue, even when presented with credible information that contradicts their position. However, in the Park impeachment, a significant proportion of South Korean citizens did just that, upon seeing family, friends and people they trust protesting against the former president and when presented with new information from media and social outlets they frequented. The approval rating of Park, which once hit about 60%, dropped to 4% just before the impeachment.

The Park impeachment was ultimately a major political moment in South Korea, but understanding how networked collected actions fueled the movement and changed minds in one case through the interaction of agents and affordances can potentially open the door to better understanding movements and how people interact with information and each other in a digital world.

“I think a lot about practical steps we can take to improve the quality of information we’re all exposed to. We’ve seen an increase in effective use of social media by fringe media, and they’re very good at using social media strategies,” Seo said. “Ultimately, I’m continuing to study agent and affordance frameworks and how we can apply it to other areas. Many studies only look at agents and actors or at structural influences, but we increasingly see how they interact.”