LAWRENCE — The University of Kansas community is mourning Tom Skrtic, Williamson Family Distinguished Professor of Special Education, who died Nov. 19. He was 75. 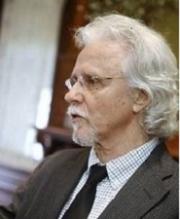 “Professor Skrtic was a dedicated scholar who made numerous contributions to his field of study and the lives of his students during his KU career that spanned more than four decades," Chancellor Douglas A. Girod said. "On behalf of the entire university community, I extend my condolences to his family, friends and colleagues.”

Michael Wehmeyer, professor and chair of special education, said Skrtic was dedicated to the department’s doctoral students and doctoral program.

“Taking his course on civic professionalism was a shared experience by doctoral students in the department for more than 30 years,” Wehmeyer said.

Skrtic published numerous books and articles throughout his career and was lauded with awards, including many from KU, for his teaching and service to the university.

“Not only was Dr. Skrtic an internationally known scholar whose work impacted the field of special education for decades, he was dedicated to his students’ success and supported the work being done by his colleagues at KU,” said Rick Ginsberg, dean of the School of Education & Human Sciences.