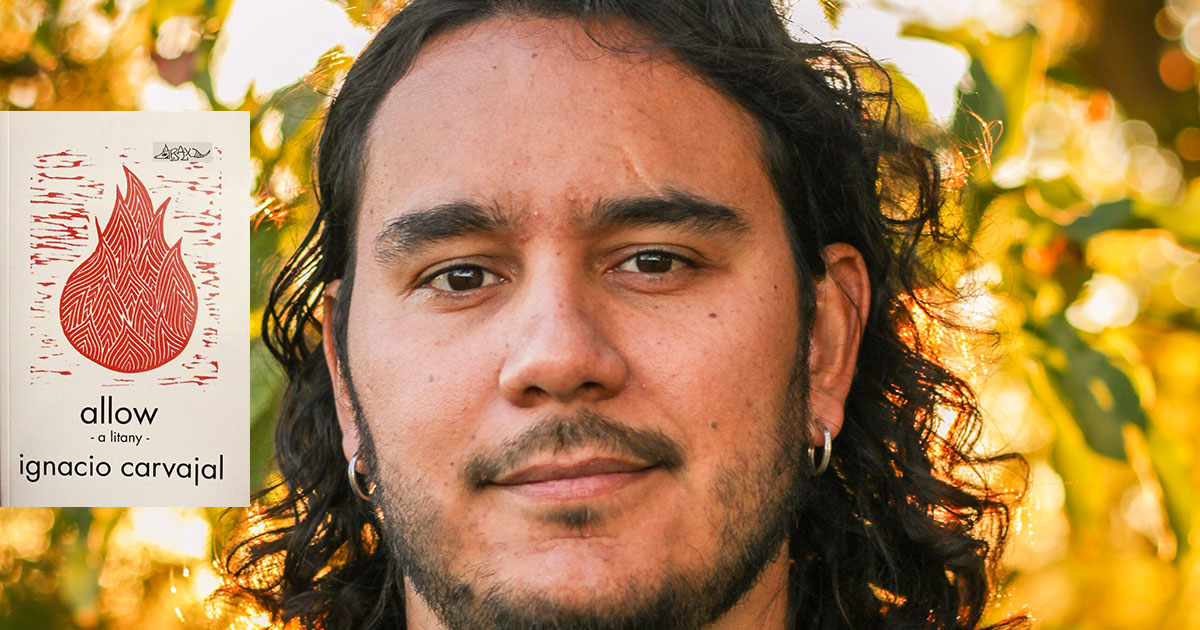 Sales of his poetry chapbook, “allow: a litany” (La Resistencia Press), will benefit the International Mayan League, which supports immigrants to the United States from historically Mayan regions, which include parts of Mexico, Guatemala, Honduras, El Salvador and Belize.

Carvajal’s expertise in the Mayan region’s Indigenous languages, K’iche’ and Kaqchikel, comes into play in his new article in The Latin Americanist journal, “Writing Ajawarem: Establishing Authority Over People and Territory in Three Sixteenth-Century Texts in the Highlands of Guatemala.” It details how Indigenous leaders in Mesoamerica attempted to preserve native authority structures even as they adapted to the impositions of Spanish Catholic colonizers in the 1500s and 1600s.

Carvajal is an assistant professor in the Department of Spanish & Portuguese at the University of Kansas and an affiliate of KU’s Indigenous Studies Program and Center for Latin American & Caribbean Studies.

“My research focuses, broadly, on two sets of related language work,” Carvajal said. “On the one hand, I study a variety of documents from the colonial period, mostly in Spanish, K’iche’ and Kaqchikel. On the other hand, I collaborate in the creation of language-learning materials for K’iche’ today. I also write poems. I have often thought about it as very separate things, but I'm learning more about how they are all just different parts of my person.”

Carvajal said that K’iche’ is not his first language. He said he is conscious of and earnest about the contradictions and responsibilities included in being a non-Indigenous learner and instructor of an Indigenous language. Most academic study of Indigenous communities has historically been carried out by outsiders, a trend that is increasingly changing.

Carvajal was born in Costa Rica and moved to Kansas when he was in middle school. His father attended graduate school at KU, earning his doctorate in educational measurement in 2011.

Ignacio Carvajal graduated from Lawrence High School, Johnson County Community College and KU before earning a doctorate from the University of Texas at Austin. It was there that he became interested in Mayan culture. He now teaches literatures, languages and cultures from Latin America at KU.

The Latin Americanist article, Carvajal said, “is about different Mayan language ways of expressing authority, especially under the alphabetic regime the Spanish imposed after invasion.” The Maya had to adapt to the colonizers’ use of the Latin alphabet in their religious and legal writings during this period. A common misconception is that writing itself didn’t exist in the continent prior to European invasion, yet Indigenous peoples had previously relied on a system that combined pictographic and syllabic writing, among other methods of memory keeping, he said.

The K’iche’ word ajawarem translates to “lordship” or “authority,” which Carvajal wrote is defined by “military and political might and legitimacy for leadership and the ability to collect tribute.”

In the article, Carvajal traced “the notion of ajawarem during the Postclassic period in the highlands and argue(s) that it is wielded in the face of colonial imposition.”

The article examines three types of documents. One is the Popul Wuj, sometimes described – misleadingly, according to Carvajal — as the Mayan Bible because it contains aspects of their cosmology. The others are groups of writings, one a collection of local histories known as the Memorial de Sololá and the other as Titulos, as in titles to the land.

“In the analysis of each,” Carvajal wrote, “I point to the commonalities that they share as responses to colonial impositions, yet also focus on the specific aspects of ... how authority was wielded by members of different lineages and political affiliations as they asserted their ajawarem under a colonial context.”

Carvajal said the documents show how various Indigenous lineages and colonialist groups (such as Franciscan and Dominican priests) were constantly reconfiguring and vying for means and expressions of political authority.

“It's really interesting,” Carvajal said, “because it was written in the context of folks being taught by the missionaries to read alphabetically and also being asked to recognize the Christian god. Other scholars and I read the incorporation of these systems as a way to navigate and resist the impositions of colonization.”

As for “allow: a litany,” Carvajal said he had been working on the poem — a chapbook-length poem spanning 26 pages in print — for about the past four years.

“It came a point where the poem had enough shape to be cohesive,” Carvajal said. “It felt like it's already something that a past self of mine wrote, so I thought it was ready to get released into the world or else be buried.”

Inspired by fellow poet monica teresa ortiz’s recent donation of book sales to an organization they believed in, Carvajal approached the new, Kansas City, Missouri-based La Resistencia Press — an independent press founded by a collective of queer writers of color by the same name — whose editor, MG Salazar, “was kind enough to agree to give all of the proceeds” to the International Mayan League.

“I thought it was a good way of fostering solidarity through poetry,” he said. “So that's the material aspect that I'm proud of about the poem. I am also proud of the communal aspect of the poem: Adriana Linares did the beautiful woodcut for the cover, and Dorian Wood set a recording of the poem to music, which is available via a QR code at the back of the book.”

The poem itself is structured as a prayer, asking for a variety of things to happen, including to:

“allow for the recompense of our mothers

for their celestial rewards to be granted earlier

for a damn advance on their salvation.”

Carvajal said a passage like that, and the poem as a whole, “works both at a specific level and on a general level.”

Carvajal’s previous poetry collection, “Plegarias,” was dedicated to his mother, so he recognizes that their relationship influences “an important part of my art.”

“Beyond that specificity — which really becomes meaningless, because a poem serves whoever reads it — women are so often charged with the mitigation of chaos and with education and spiritual fortification — rearing and nurturing — of men, women, nonbinary folks or anybody, right? So I think they’re due an advance on their salvation.”

Chris Perreira, assistant professor of American studies at KU, writes of the poem: “An appeal as much as an imperative, ‘allow’ registers diasporic potentialities of impossible kinships — measuring space and time across natural terrains and national borders.”

Image: Ignacio Carvajal and the cover of his new book of poetry. Credit: Photo by Lourdes Kalusha-Aguirre.