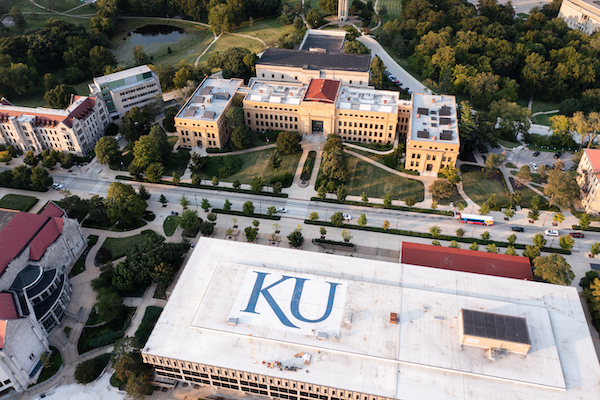 LAWRENCE — A new university landmark on the Lawrence campus measures 80 feet from top to bottom yet goes unnoticed by people walking right past it along Jayhawk Boulevard.

That’s because the University of Kansas wordmark — a giant “K-U” in blue — is atop the Wescoe Hall roof and visible only from the air.

CentiMark, a commercial roofing company with offices in Lenexa, recently installed a new roof for Wescoe Hall. When Mark Reiske, KU’s director for facilities, planning & development, found out that the company had done rooftop logos for other clients like Micron Technologies and Gas Monkey Garage, he was interested in a KU presence on Wescoe.

“There are not many places where you can install this large of a graphic,” Reiske said.

Once the new roof was on Wescoe, CentiMark crews heat-welded square sheets of a thermal plastic material in KU blue to the roof, guided by a giant stencil.

“It was a lot a fun to put together,” said Don Fazio, CentiMark senior project manager.

The wordmark was added to the roof at no cost to the university.

“This graphic will be highly visible on Google Earth and is fairly close to what they have as the centroid of campus,” Reiske said. “It is just one more name recognition item.”

As for the benefit to the company, Steve Ferencz, CentiMark executive vice president, said it was a good team-building opportunity.

“Once we took the drone photos, (the crew) was really excited about it,” he said.

Moreover, Ferencz is the parent of a KU alumnus and understands the passion Jayhawks have for the university.

“It’s been a challenging year and a half, and this is a pretty neat thing,” he said.

Reiske added that the rooftop wordmark, at no cost, is a visible example of the partnership the university has with its job order contractors.

“They are a group of partners that fully understand KU and have repeatedly worked well with us,” Reiske said. “CentiMark is just a great example of one of these.”