LAWRENCE — The American Society for Cell Biology (ASCB) announced in early September that Donna Ginther, University of Kansas Roy A. Roberts Distinguished Professor of Economics, has been named recipient of the group’s prestigious Public Service Award, which recognizes outstanding public service in support of biomedical research or advocacy of sound research policies. 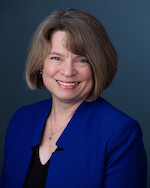 ASCB noted that its 2021 Public Service Award, granted for Ginther’s work of over a decade on identifying a need for more diversity and inclusiveness within the scientific community, was especially important given many of the divisions across the nation in recent years underlining the ongoing lack of equity and inclusion. Dr. Anthony Fauci received the organization’s honor in 2020.

Ginther and Dr. Raynard Kington, former acting director of the National Institutes of Health (NIH) and co-recipient, will be formally honored in December at ASCB’s annual meeting in acknowledgment of their “leadership in alerting the scientific community to the serious problem of racial inequity in research funding at the NIH and continuing to call for change.”

The NIH responded to the national publicity generated by that paper’s findings by forming a special workforce that conducted followup research and held public hearings. That group’s final report, which specifically cited Ginther’s research as the catalyst for its recommendations, unveiled policy initiatives that included bias and diversity awareness training to improve NIH’s peer review process; the creation of a pilot program designed to make grant applications anonymous; creation of a chief diversity officer position within NIH; implementation of a new mentoring network to connect students, postdoctoral fellows and faculty with experienced mentors; and the development of special workshops on grantsmanship.

In response to comments from that working group, Ginther, who is also the director of KU’s Institute for Policy & Social Research, and a number of other prominent researchers subsequently sought to explain why Black scientists are less likely to receive NIH funding and focused on the relative lack of early career publications. (“Publications as Predictors of Racial and Ethnic Differences in NIH Research Awards” in the journal, PLOS ONE; Donna Ginther, Jodi Basner, Unni Jensen, Joshua Schnell, Raynard Kington and Walter Schaffer.)

Utilizing data from almost 2,400 NIH Biosketches submitted between 2003-2006 as part of new applications for NIH Type 1 R01 awards to obtain detailed information on applicants’ training and scholarly activities, including publications, the analysis found that Black applicants had fewer citations than their white counterparts and that the papers reported appeared in journals with relatively lower influence.

“We found that because publications explain so much of the gap in funding, an intervention that focuses on how to convert research funding into publications seems to be warranted,” Ginther told KU News Service in 2018. She said that the research had found the scientists’ careers seeming to diverge in terms of citations during the doctoral and postdoctoral period. “That seems to be the obvious place to start intervening,” Ginther added. “Right around the postdoc and early career period to try to make sure that Black investigators have the tacit knowledge needed to generate competitive publication records.”

The 2018 PLOS ONE article observed that improved mentoring was likely to be an important part of addressing the early publication issue, applauding the emphasis by NIH to enhance the diversity of the scientific workforce, including the National Research Mentoring Network, in an effort to bolster professional networks for researchers from underrepresented groups; and that better mentoring had been previously shown to improve the number and quality of publications and future research grants for junior female economists.

The ASCB, which counts 35 Nobel Laureates among its members, represents about 7,000 basic biomedical researchers in the United States and over 60 countries around the world. The research done by a vast majority of ASCB members is supported in whole or in part through grants received from the NIH, the National Science Foundation and other federal agencies.