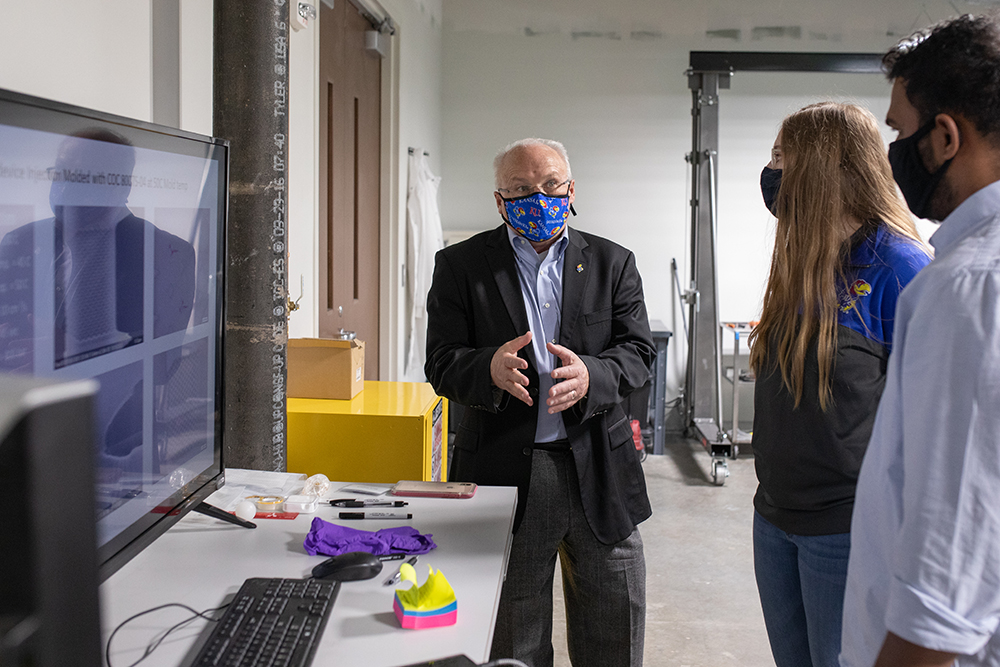 LAWRENCE — With the United States facing another surge of COVID-19 due to the Delta variant, an at-home test for the virus developed by researchers at the University of Kansas is moving toward commercial production. The aim is to launch the product in early 2022.

“They’re building the handheld instrument right now,” said Steven Soper, a Foundation Distinguished Professor with appointments in the departments of Mechanical Engineering and Chemistry. “Following our successful proof-of-concept testing as a result of funding from the NIH, it will go into production and marketed by BioFluidica.”

Soper’s team, which includes a half-dozen graduate students in bioengineering and chemistry, has been working on the project since early June 2020. They have been repurposing “lab on a chip” technology he had previously developed to give doctors simple tools to more easily and quickly diagnose conditions ranging from stroke to a variety of cancers so that it could be used to select SARS-CoV-2 virus particles directly from saliva samples and count them one at a time. At-home users would put saliva on the test chip, then use a hand-held electronic reader — about the size of an iPhone — to analyze the results. The whole process would take around 15 minutes.

Soper’s group, including his private company, BioFluidica, is working with an undisclosed company that has experience in large-scale medical manufacturing to produce the chip consumables and the handheld units. Users would be able to buy a test for about $10 and the reader, which can be reused many times over, for about $50. The project will also require emergency use authorization from the FDA. Documentation for this handheld will be submitted to the FDA in the fourth quarter of 2021.

The emergence of the Delta variant means testing will continue to be needed for the foreseeable future, Soper said. His team is already working on adapting the test to detect Delta and other changes to the virus.

“We’re making sure we’re ready to handle any variant that may be generated and that may pop up in the United States,” he said. “Not everyone’s getting vaccinated. There’s always going to be a population that won’t be vaccinated. What happens is, if they get infected, that means the virus can change — and they can reinfect people, even people who have been vaccinated.”

Soper said the new device could eventually be used to quickly diagnose other illnesses, including influenza and other viruses, as well as bacterial infections. But COVID is the most pressing issue at the moment.

“This is always a moving target with COVID-19,” he said. “Everyone needs to be careful.”

Soper earned his doctorate in bioanalytical chemistry from KU in 1989 and returned to the university as a faculty member in 2016. He brought along his company, BioFluidica, which previously created new products to help doctors test for various types of cancers, including breast, colon and prostate cancer. Funding to develop the COVID-19 test comes from the National Institutes of Health RADx Program.

Photo: Steven Soper, a Foundation Distinguished Professor with appointments in the School of Engineering and Department of Chemistry, is leading an effort to develop a quick-turnaround COVID-19 test that can be used at home. Soper’s team, which includes a half-dozen graduate students in bioengineering and chemistry, is repurposing “lab on a chip” technology he had previously developed to give doctors simple tools to more easily and quickly diagnose conditions ranging from stroke to colon cancer. Credit: Meg Kumin, KU Marketing Communications.