LAWRENCE — The University of Kansas hosted K-12 teachers from around the country earlier this year for a five-day summer camp designed to help them teach young students about cybersecurity — and hopefully begin to groom the next generation of experts to protect America’s online infrastructure. 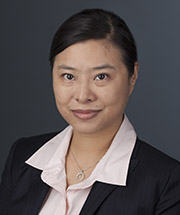 Fengjun Li, associate professor of electrical engineering & computer science, leads the KU Privacy and Security (KUPS) Group of the Information Assurance Lab at the Information & Telecommunication Technology Center. She said the camp was intended to help lay the foundations to build a growing cybersecurity workforce.

“You’ve seen the security incidents that are being reported every day,” she said, including “ransomware” attacks like the one that shut down a major East Coast oil pipeline in June. “Every organization needs to build their cybersecurity team, but they don’t have a qualified workforce. From the university, we want to produce graduate and undergraduate students who have the knowledge to protect our society. And we think it would help students to learn about this very young.”

That means starting as young as kindergarten. Younger kids “are already exposed to cyberabuse and cyberattacks,” she said. “We also want to promote their interest in cybersecurity and to promote a cybersecurity workforce.”

Sessions at the camp included lectures from faculty at KU’s Department of Electrical Engineering & Computer Science, hands-on computer lab experience, panel discussions with cybersecurity professionals from the academic, government and business sectors, as well as information on curriculum and lesson plan design.

One of the attending teachers was Ericka Mabion, a mentor/presenter for educational technology and STEM curriculum integration for Kansas City (Missouri) Public Schools. “We are creating a cybersecurity pathway for our students,” she said. “Participating in the program was a way to fully immerse myself and get started.”

Her district recently completed a “Cyber to School” pilot program that reached more than 700 students with training courses on digital literacy, security, cloud computing and more. Mabion said the GenCyber camp at KU was helpful in building skills Mabion will help pass on to young students in Kansas City.

“The staff and faculty at KU were very attentive to the goals teachers wanted to accomplish,” Mabion said. “There are a wide range of topics and avenues that are included in cybersecurity that the normal person doesn’t think of, that we take for granted.”

KU hosted the first and only GenCyber camp in Kansas in 2016. Since then, the university has hosted GenCyber camps every summer, skipping a year in 2020 due to the COVID-19 pandemic. Originally, the camps were funded with a five-year (2016-2020) grant from the National Science Foundation CyberCorps for Scholarships Service program. Li said the grant is now being renewed on a year-by-year basis and that funding for the 2022 camp has been approved. Scheduling will be announced at a later date.

“It was really awesome,” Mabion said of the 2021 edition. “A lot of times we ask students to do things that we don’t really have the lens to do. I feel like I can be a facilitator because I’ve had that experience as well.”